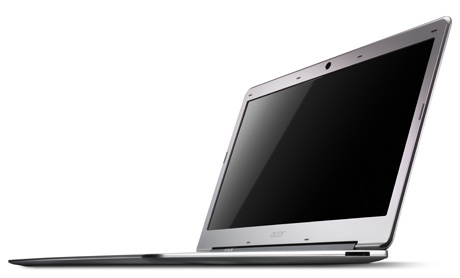 Intel's Ultrabook notebook design is finally becoming a reality to consumers. Intel first announced its ultra-thin notebook concept last May and today Acer revealed that it will be the first PC maker to offer up a product based on Intel's design. The Acer Aspire S3-951 will go on sale in stores and online retail sites this week in the US with pricing that will begin at $899.

Acer says the Aspire S3-951 will weight just 2.98 pounds and will be just .68 inches thick at its thickest point. The magnesium aluminum/alloy casing contains a 13.3 inch LED screen. An Intel Core i5-based processor is running things inside and it also has a 20 GB solid state drive for fast booting to the Windows 7 operating system. It has a regular 320 GB hard drive for the rest of your needs along with 4 GB of RAM. The Acer Aspire S3-951 will support up to six hours of continuous use. If the notebook is not used in eight hours it goes into a "deep sleep" battery saving mode. The notebook can be reawakened from this mode in just six seconds. Acer claims the notebook will have up to 50 days (no, that's not a typo) of standby power.

While Acer may be first out of the gate with an Ultrabook-based notebook, a number of other PC makers, including Toshiba, Asus, and Lenovo all have announced plans to release notebooks based on Intel's concept later in 2011. Rumors are that HP and Dell also have Ultrabooks in the works.