If you were really excited about Jeff Bezos' promise last week to announce a new, top of the line, eighth generation Kindle this week, today's the day. The Kindle Oasis has been revealed.

Most of what we now know is the same as yesterday's leaks, such as that it's 3.4 mm thin at its thinnest and weighs in at just 4.6 ounces. The device promises "a featherweight polymer frame that is plated with metal by structural electroplating".

The Oasis is the first asymmetrical Kindle in years. A bulge on the side (which brings the width to 8.5 mm) makes room for the guts of the device, including the battery. That bulge is also supposed to help with one-handed use of the device, putting the bulk of the weight into the hand that's holding it. 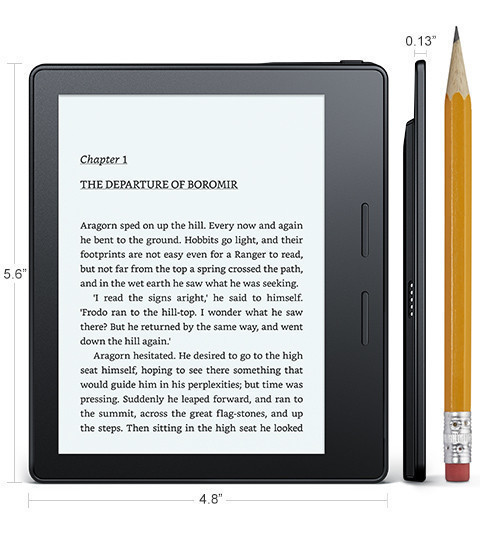 You're probably thinking right now, "But what if I'm left-handed?" Amazon has you covered for that as well. Since the device has an accelerometer, it can shift its orientation.

Bringing it back to the battery, Amazon is promising months of battery life for the Oasis, where other Kindles promise weeks. You'll also see that the new e-reader brings back the physical page turn buttons, but also includes a touchscreen, giving users options on how they're going to turn the page.

The firm promises the Next Generation Paperwhite Display in the Oasis, with 300 ppi and 60% more LEDs for a brighter display. It comes with a cover as well, which includes its own battery.

With the design, the display, the battery life, and more, this is clearly the best Kindle that Amazon has offered to date. With that comes an expensive price tag, with the device starting at $289.99. For $359.99, you can grab free 3G service on the device; however, both of the above models come with Amazon's "Special Offers", which is a nice term for ads. Those can be removed for an additional $20.