The alleged die shot of the GPU powering AMD's upcoming RX 7000 series graphics cards, based on the RDNA 3 architecture, which are launching later tonight, has leaked. While it is in no way a perfectly clear capture in glorious 4K or something, we do get a fair idea of what the Navi 31 die itself looks like. 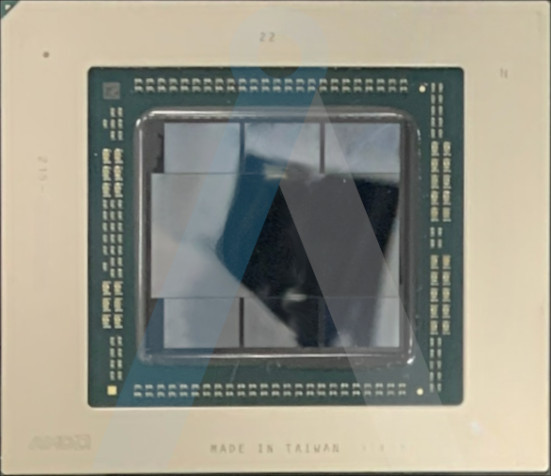 First, do not be confused by that "A" shaped logo on top of the image. That is the watermark of Angstronomics, who is the blogger that leaked this photo. What's actually interesting about the die shot is the layout of the chip and its infinity cache components.

We know that AMD is moving to a chiplet-based packaging on its GPUs too. While the core will be based on an alleged 308mm2 GCD (5nm), the infinity will consist of six MCDs (6nm) each being 37.5mm2. Although prior rumors had suggested that each MCD will have 64MB of stacked cache, more recent reports suggest 16MB on each MCD for first-gen Navi 31 for a total of 96MB infinity cache.

There is reportedly also the possibility of 32MB MCDs or a total of 192MB of infinity cache on Navi 31. However, that is apparently planned for when the Navi 31 refresh RX 7x50 series comes out sometime in the future. Tonight, AMD is expected to unveil two premium SKUs, the RX 7900 XTX and the RX 7900 XT.

The chiplet design approach allows AMD to utilize a lower-cost process for stuff like the I/O or memory whereas the cutting-edge lithography can be used for the core itself.

Meanwhile, the slightly cut-down RX 7900 XT will purportedly feature 42WGP or 84CU for a total of 10,752 SP. The memory subsystem is also slashed down to 20GB across a 320-bit bus. And once again, depending on the speed of the memory chips used, the bandwidth could be 800GB/s (for 20Gbps) or 720GB/s (for 18Gbps). The infinity cache will also be decreased from 96MB down to 80MB.