Over the last few months we’ve seen many statistics showing that Google’s Android platform is rising to the top of the pile in the smartphone category – which is quite a feat when you’re fighting Apple, RIM and Microsoft (well, soon). Quantcast (via Engadget) has just released statistics showing that Android now accounts for 25% of mobile Internet traffic in North America, mostly at the expense of Apple’s iOS devices. Apple’s other iOS device, the iPad, was not included in the smartphone-only statistics. 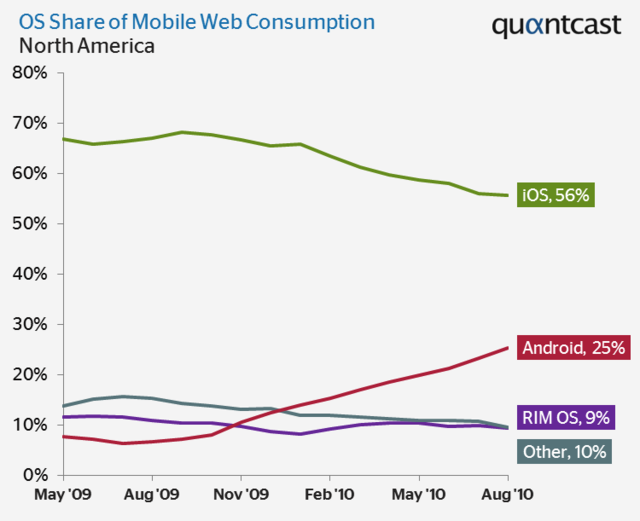 Mark Twain once said that “there are lies, damned lies and statistics”. It’s important to remember that these are percentages, and to read them accordingly. These are not market shares in units – these numbers don’t say that Google’s competitors are literally selling less units than before, instead they simply show that Android devices purchases are on the rise. However, I’m sure there are a few Google evangelists out there right now using graphs such as these to encourage OEMs to join the Android trend. Some of you may also note that Microsoft’s Windows Phone OS and Nokia’s Symbian OS are both notably absent from the statistics.

Quantcast will release a by-vendor version of the statistics within the next week.