One of the many new features that Apple is introducing with iOS 8 is a new suite focused on health and fitness. The front end through which users engage is the beautiful new Health app, which acts as a one-stop shop for all matters related to a user's wellbeing, including nutrition management, sleep diaries, fitness tracking, and even an emergency card - accessible from the lock screen - to let others know of allergies, medication and other vital information. 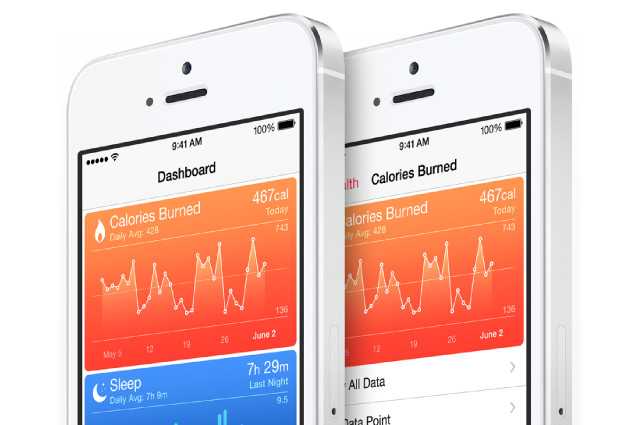 To help developers make the most of this app, Apple created a new tool for them called HealthKit, which allows them to hook into the Health app, to allow data to be shared between their own respective apps and the aggregated view that the Health hub offers to the user. Using HealthKit, developers can, for example, share exercise data from a fitness app, or heart rate data from a wearable monitor. It can even share data with your doctor, if you allow it.

It's an exciting proposition, and one that has the potential to greatly improve how users manage their health. But not everyone is quite so happy with the announcement of HealthKit (and we don't just mean Samsung).

As it turns out, there is a company called HealthKit, which develops software designed to help practitioners and administrators to manage their health care centers - and they're not at all happy about Apple's choice of name for its developer tools, despite Apple's HealthKit not really being a public brand, but rather a name that only devs are ever likely to see. In a blog post on the company's site, entitled "Apple likes our name and so do we!", a representative for HealthKit made their feelings clear on the subject. 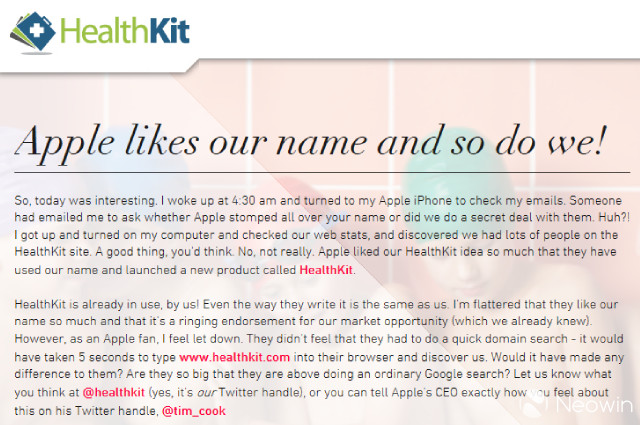 "I'm flattered that they like our name so much," said the rep, "and that it's a ringing endorsement for our market opportunity (which we already knew). However, as an Apple fan, I feel let down. They didn't feel that they had to do a quick domain search - it would have taken 5 seconds to type www.healthkit.com into their browser and discover us. Would it have made a difference to them? Are they so big that they are above doing an ordinary Google search?"

The spokesperson ended the post by encouraging users to contact Apple's chief executive about the naming conflict: "Let us know what you think at @healthkit (yes, it's our Twitter handle), or you can tell Apple's CEO exactly how you feel about this on his Twitter handle, @tim_cook."

This isn't the first time a tech giant has found itself facing complaints from another company over branding. Microsoft was famously forced to rebrand SkyDrive after losing a trademark battle with British Sky Broadcasting. Following its decision to rebrand it as OneDrive, the chief operating officer of One.com told Neowin that he "would have thought Microsoft would have done more thorough research" before choosing its new name, given his belief that OneDrive was a "similar name with a similar product" to his company's cloud services.