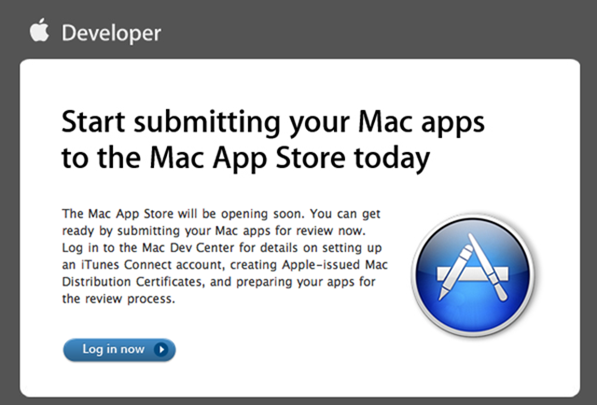 Apple has opened the doors for their Mac App Store submissions., according to Maclife. Developers can now begin sending in their applications to Apple for review, so they will be posted when the store officially opens for business.

The email was sent out to all Mac developers to begin the submission process. The original announcement said that the Mac App Store will open up within 90-days of the announcement, and less than a month later, the beginning phase is just getting under way.

Apple announced last month at 'Back to the Mac', the all new Mac OS X Lion, coming in summer 2011, with one of the new major features being the brand new Mac App Store. The online market place for applications and possibly games will work just like the App Store for iOS devices, where users can download and install applications.

Apple will begin testing their new Mac App Store on Mac OS X Snow Leopard, and will come featured as part of Lion next year. Apple still hasn't announced when the store will open, but users will be able to beta test it in the near future.

You can watch just how the Mac App Store will work here in this video from Back to the Mac.