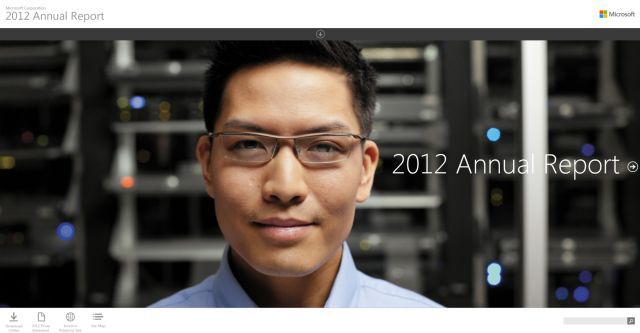 With Windows 8 now two and a half weeks away from its launch, Microsoft is prepping its shareholders for what sounds like a fundamental change in the company's businesses.

The company launched its annual report for its current fiscal year today and part of that report was Microsoft CEO Steve Ballmer's annual letter to the company's shareholders. In the letter Ballmer wrote:

Last year in this letter I said that over time, the full value of our software will be seen and felt in how people use devices and services at work and in their personal lives. This is a significant shift, both in what we do and how we see ourselves — as a devices and services company. It impacts how we run the company, how we develop new experiences, and how we take products to market for both consumers and businesses. The work we have accomplished in the past year and the roadmap in front of us brings this to life.

Ballmer added Microsoft will still work with a variety of hardware companies to create PCs, tablets and smartphones that will run Microsoft-created software such as Windows 8, Windows RT and Windows Phone. However, it will also continue to launch specific hardware on its own such as its Xbox game console and the Surface tablet.

The launch of Windows 8 will be crucial to Microsoft's goal of becoming an all encompassing devices and services company, linking a number of hardware and software products together. In his letter, Ballmer said:

Windows 8 unites the light, thin and fun aspects of a tablet with the power of a PC. It's beautiful, it's functional, and it's perfect for both personal and professional use. Xbox Music, Video, Games and SmartGlass apps make it possible to select a movie from a PC, start playing it on the TV, and finish watching it on a phone. SkyDrive, our cloud storage solution, effortlessly connects content across a user's devices. Bing's powerful search technologies in Windows 8 will help customers get more done. Skype has a beautiful new Windows 8 app and connects directly into the new Office.

The letter also mentioned the upcoming launch of the new version of Microsoft Office as well as Microsoft's many services for business users such as Microsoft Dynamics, Exchange, SharePoint, Lync, and more.

For the future, Ballmer wrote that Microsoft will continue to develop "new form factors that have increasingly natural ways to use them including touch, gestures and speech" along with increasing their efforts in cloud-based services, and having its Windows platform be available on as many hardware and software platforms as possible to "unify the cross-device user experience"