A Bitcoin mining hoax started by a prankster on the 4chan imageboard has reportedly led some Mac users into erasing all of their data within seconds.

The prankster posted an image that stated that Apple has implemented Bitcoin mining into its Mac computers since 2009 and that users simply need to enter a command to activate the feature. The command of course is the infamous "sudo rm -rf /*" which is used to force-erase data recursively on UNIX/Linux operating systems. The prank has been used on Linux users in support forums for some time and is now being used to trick Mac users who have a similar set of commands and architecture under the hood. 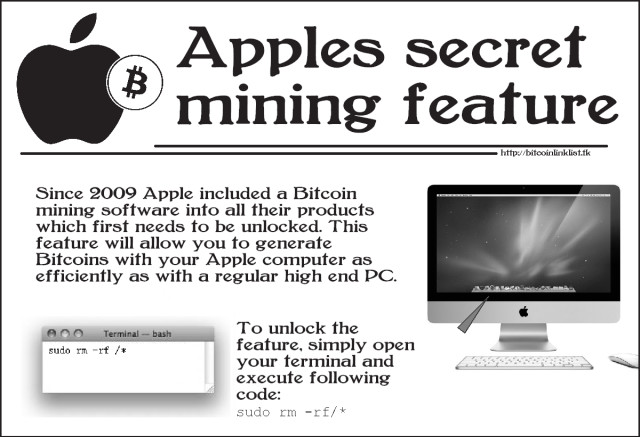 While most users were aware of the command and laughed off the prank, two people reportedly tried the "trick" and have unfortunately lost their system data, leaving them stuck with formatted drives. One user even asked for a solution in the same 4chan thread as he lost work related stuff.

New devices and technology often attract such pranks and hoaxes. Recently some users were tricked into bricking their Xbox One consoles in promise of backward compatibility with Xbox 360 games.