After many rumors and much speculation, the existence of Call of Duty: WWII was revealed yesterday with a countdown page leading to its official announcement . Just a day later, some Reddit users have managed to uncover a few of the game's screenshots, and maybe even its release information.

The screenshots were unwittingly made available on the announcement page's registration section. While the images were quickly taken down and replaced, a vigilant Reddit user managed to capture them beforehand, seen below.

A couple of the images show a squad of American soldiers, who are most probably the player character's squad in the single-player campaign. They also quite clearly confirm the iconic Tommy Gun's return to the series.

Meanwhile, the second leak is on a larger scale, where another Reddit user has managed to grab some pictures of what looks to be a store advertisement for the game, seen below.

The main description transcribed from the image reads:

Call of Duty returns to its roots with Call of Duty: WWII - a breathtaking experience that redefines World War II for a new gaming generation. Land in Normandy on D-Day and battle across Europe through iconic locations in history’s most monumental war. Experience classic Call of Duty combat, the bonds of camaraderie, and the unforgiving nature of war against a global power throwing the world into tyranny.

The advertisement states the game will arrive with a single-player campaign consisting of a "gritty intense journey through the battlegrounds of war", along with "fast-paced combat across many of World War II's most iconic locations" in multiplayer.

Admittedly, these are pretty standard features fans expect from Call of Duty games nowadays. But, the images also reveal the game will also have a co-op campaign with an original story, surprisingly lacking any mentions of a zombie mode. 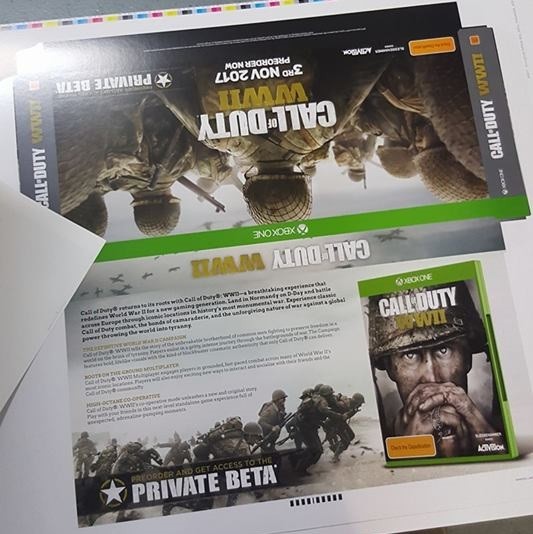 The last image taken shows a November 3, 2017, release date for the game, along with an upcoming beta for players who pre-order.

Keep in mind that Activision is yet to confirm any of these details, so it's best to take the leaked information with a grain of salt and wait for the official reveal of Call of Duty: WWII on April 26.