Casio is one of the most renowned watch brands in the world, and as smartwatches have become more commonplace, the company has brought some smarts to its watches, but it never went all the way with a platform like Wear OS. That's changing, though, as the company has just announced (via Asia One) its first smartwatch powered by Google's operating system, the G-SQUAD PRO GSW-H1000.

The GSW-H1000 features the trademark shock resistance of the G-SHOCK lineup, along with water resistance up to 200 meters, along with all the smarts enabled by Wear OS, and some unique features of its own. It has a dual-layer display similar to the TicWatch Pro 3, with an always-on LCD display for basic information, and a full-color display for things like Maps and other more advanced features. The color display has a 360x360 resolution, and both screens are 1.2 inches across. 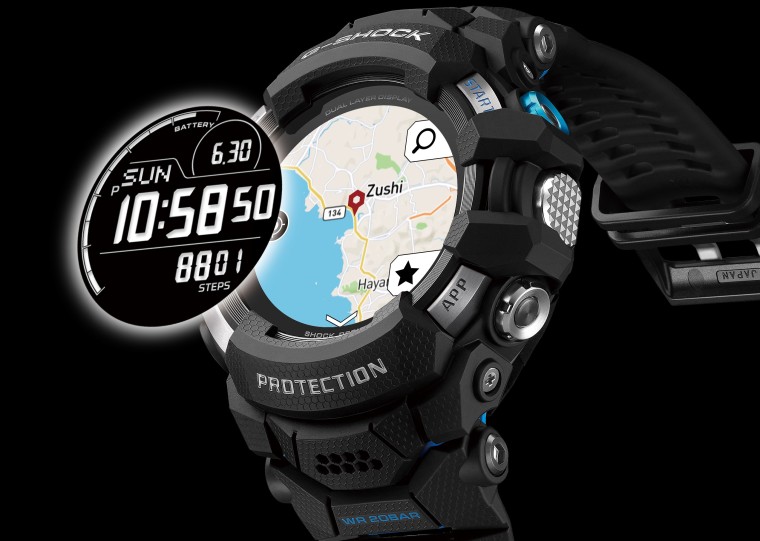 You can use the watch in normal mode, which uses the color screen when necessary and the monochrome display when the watch is inactive, or switch to Multi-Timepiece mode to only use the monochrome display and extend the battery life. If you use it in normal mode, battery life is about 1.5 days, while in Multi-Timepiece mode, it should last roughly a month.

In addition to the fitness tracking apps that Wear OS allows you to install, the GSW-H1000 will also have Casio's in-house fitness app with support for 15 activities and 24 indoor workout modes, though Casio says you can add up to eight other work modes on top of the 24 preloaded ones.

The watch also has all the sensors you'd expect for fitness tracking, including a heart rate monitor, GPS, compass, air pressure sensor, and so on. Using Casio's G-SHOCK MOVE smartphone app, you can also do things like record yourself riding a bike and overlay sensor data like your speed on top of the video.

Many details of the G-SQUAD PRO GSW-H1000 weren't revealed, though, like its chipset, though the obvious choice would be the Snapdragon 4100 that launched last year. Casio also didn't reveal pricing or availability details for the watch. As for color options, there are at least three - the GSW-H1000-1 in black with blue accents, GSW-H1000-1A in black with some silver buttons, and the GSW-H1000-1A4 in red and black.