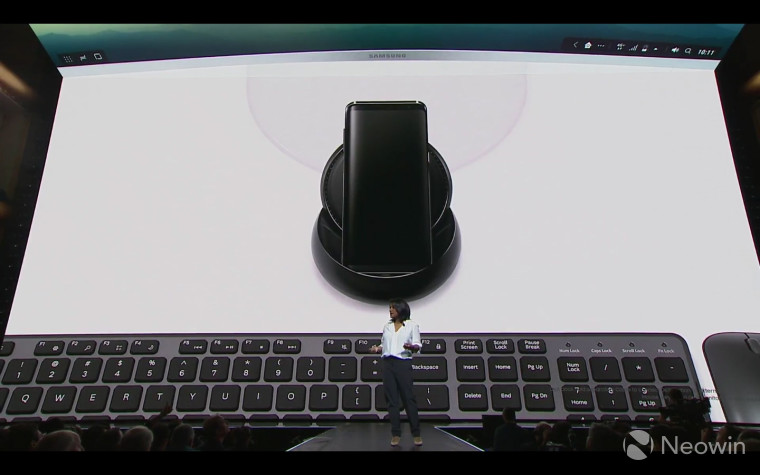 Alongside its new Galaxy S8 and S8+ flagships, Samsung also unveiled the DeX Station, a desktop dock for its new PC-like user experience. DeX is similar in concept to Microsoft's Continuum mode, which enables owners to use a mouse and keyboard with their high-end Windows 10 Mobile handsets when connected to an external display.

During its Galaxy S8 launch event, Samsung didn't announce any details regarding pricing - but the DeX Station has now appeared on its site, available to pre-order for $149.99. The dock includes:

Additionally, Samsung says your handset "will charge via USB-C and stay cool with a built-in fan, all while powering your desktop experience."

At $149.99, the DeX Station costs the same as HP's Desk Dock for its Elite x3 Windows 10 Mobile flagship. However, HP sells the Elite x3 and Desk Dock as a bundle for $799, while the Galaxy S8 handsets - priced from $749 - and DeX Station will be sold separately. HP's dock also includes a separate charging port, leaving its USB-C port usable for other devices. Both HP and Samsung require users to purchase a mouse, keyboard and monitor separately too - so the cost of using these desktop docking solutions can end up far higher.

Samsung says that DeX offers "a true desktop PC experience", but as with Microsoft's Continuum - which can't run desktop-class Windows applications - DeX is limited to running Android apps, most of which were designed primarily with phones in mind.

Only a handful of Android apps have even been optimized for tablet use, much less for mouse and keyboard control on larger displays, although Microsoft has confirmed that it's working with Samsung to optimize its Office apps for the DeX interface. Microsoft also announced yesterday that it will sell its own versions of the Galaxy S8 and S8+ as 'Microsoft Edition' devices, with its own apps pre-installed.

You can see more images of the DeX Station in the gallery below.