Amazon announced its new MMORPG dubbed New World last year and the game is set to launch on August 31. Currently, it is available as a closed beta to select people since yesterday and it seems the title is already creating quite a buzz. And while New World itself may well be really good, today it's more so in the news because running the game on a GeForce RTX 3090 could apparently - for some reason - be killing the mighty card.

Although not everyone will likely encounter this, several users on a New World forum thread and on a New World subreddit thread have reported this so far. What's striking about this incident is that the vast majority of users who are experiencing this problem seem to own EVGA FTW3 variants but there are also some who own 3090s from other brands.

Have to RMA my 3090 :( New World gave it the same issues as MCC except this time it's completely fried. Fingers crossed it doesn't take a decade to get a new one.

Playing the New World beta on my EVGA 3090 has fried my graphics card completely. There are many accounts of this same thing happening with the same card with the same game.@TEAMEVGA @playnewworld @EVGA_JacobF

I just want to make sure this doesn't happen to others

So far there is no official word from either EVGA, Nvidia, or the New World team about what could potentially be causing so many of Nvidia's Ampere flagship gaming GPU to die. And while no one at this moment is absolutely sure of what's happening, some users are reporting that their cards would reach very high temperatures suggesting that the problem may be here.

Update: It appears the issue was already being monitored in a separate thread on the New World forum other than the one we linked here earlier. There, a customer service and support agent had posted a possible solution that may help users. Below is an image of the solution provided: 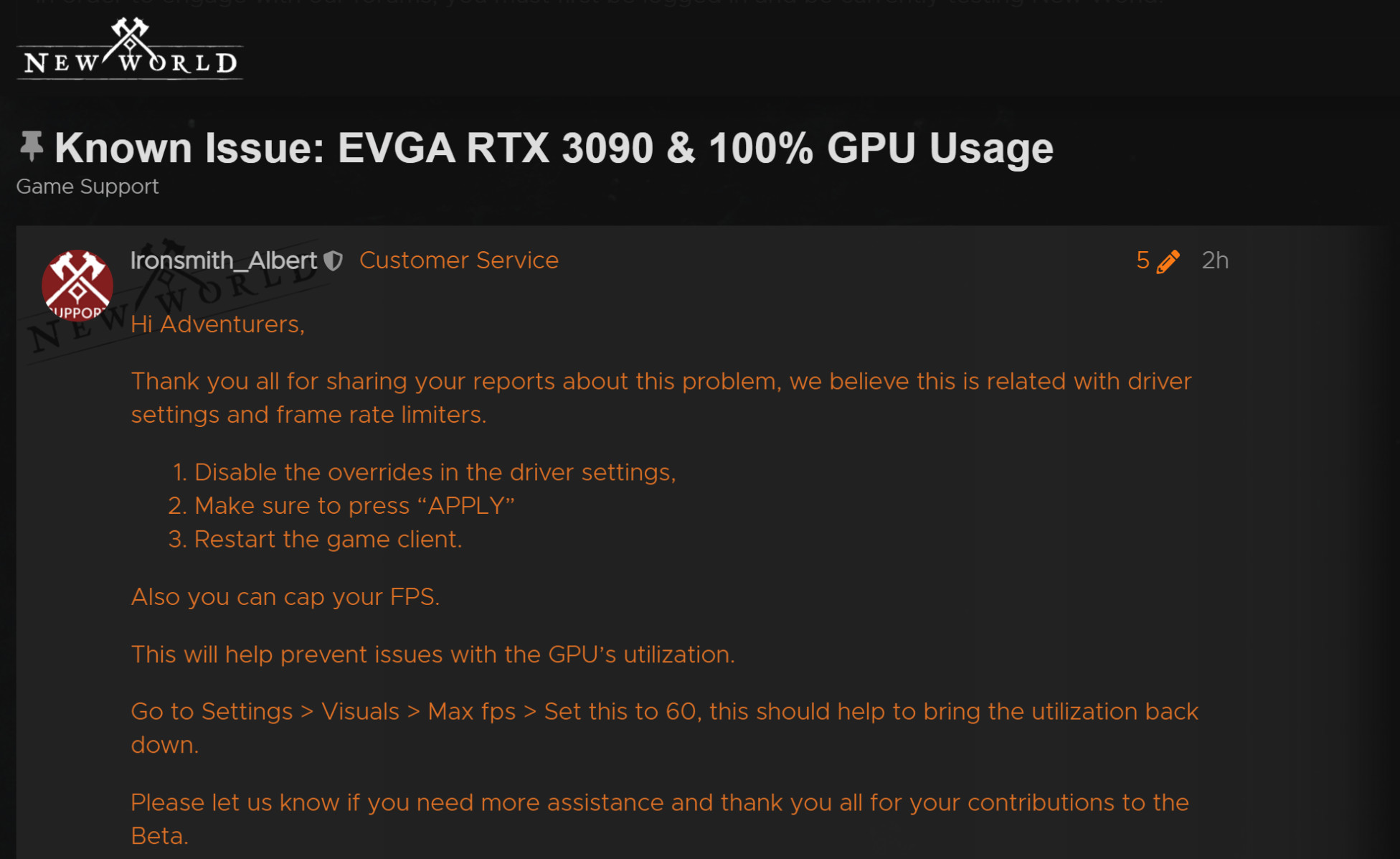 Update 2: We were contacted by a spokesperson at Amazon Games who has offered the following statement:

New World makes standard DirectX calls as provided by the Windows API. We have seen no indication of widespread issues with 3090s, either in the beta or during our many months of alpha testing.

The New World Closed Beta is safe to play. In order to further reassure players, we will implement a patch today that caps frames per second on our menu screen. We’re grateful for the support New World is receiving from players around the world, and will keep listening to their feedback throughout Beta and beyond.

Essentially the New World team will be releasing a new patch today that will cap the framerate in the game's menu screen. It was noticed by a lot of the beta testers that the game would output a very high amount of frames in the menu screen which was probably causing the affected GPUs to brick themselves.

Amazon, however, has denied that it's the game causing this issue as it apparently did not experience such problems during its own testing.