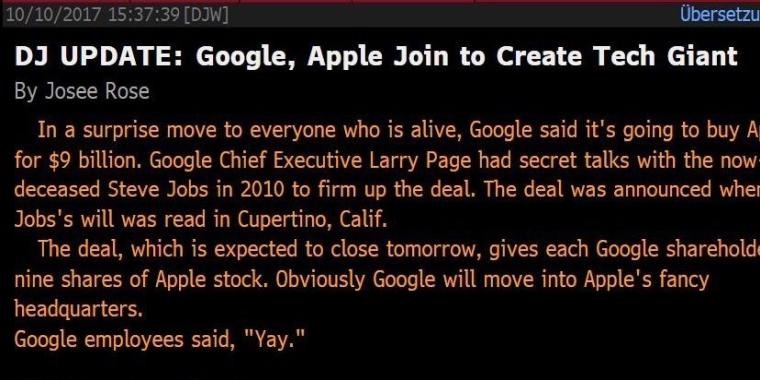 Google and Facebook are not the only ones spreading fake news these days. The phenomenon has now hit the Dow Jones newswire, courtesy of a "technical error."

Earlier today, stories started showing up on the business news service that tech giant Google was buying even bigger tech giant Apple for a rather paltry $9 billion. Needless to say, the stories turned a few heads, particularly with headlines like "Google Says Yay" and "Google Says Steve Jobs Suggested This in His Will." Stories also claimed the deal was supposed to close tomorrow, and part of the deal was Google taking over Apple's new headquarters.

“Please disregard the headlines that ran on Dow Jones Newswires between 9:34 a.m. ET and 9:36 a.m. ET. Due to a technical error, the headlines were published. All of those headlines are being removed from the wires. We apologize for the error.”

Despite the fact that the stories were obviously fake, Apple stock quickly jumped to $2 to around the $158 level. After the Dow Jones statement, shares are now back to the normal $156 price from before the bogus news hit.