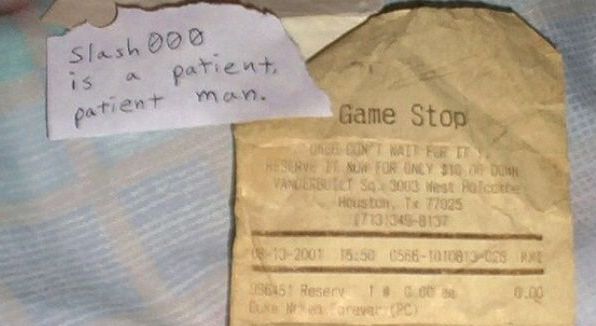 Earlier this week, Duke Nukem Forever finally shipped to stores in the US. The first person shooter which took 15 years to complete, hasn't gotten the best reviews from critics but so far the game has been selling well. Now comes word that a fan who pre-ordered the game back in 2001 not only got his pre-order honored but the game's development team sent him a boatload of Duke Nukem swag for waiting so long.

As reported by Gamersmint.com, a person known only as "Slash000" kept his GameStop pre-order receipt for Duke Nukem Forever (as you can see from the photo above) and the store honored that 10 year old pre-order. Apparently word got back about this long ago pre-order to Gearbox Software, who took over the game's development after original developer 3D Realms laid off its development team in 2009. So "Slash000" found himself the lucky recipient of a ton of Duke Nukem related swag sent over to him by Gearbox. Among the items sent to the long time Duke Nukem fan was a signed copy of Duke Nukem Forever Balls of Steel Collector's Edition, Duke Nukem t-shirts, a belt buckle, shot glasses, a Logitech gaming PC keyboard and more.

Meanwhile, Gearbox Software head man Randy Pitchford has been making statements that refer to Duke Nukem Forever's low review scores but high sales. In a post on his Twitter page he states, "With sales data, It seems like *customers* love Duke. I guess sometimes we want greasy hamburgers instead of caviar..."