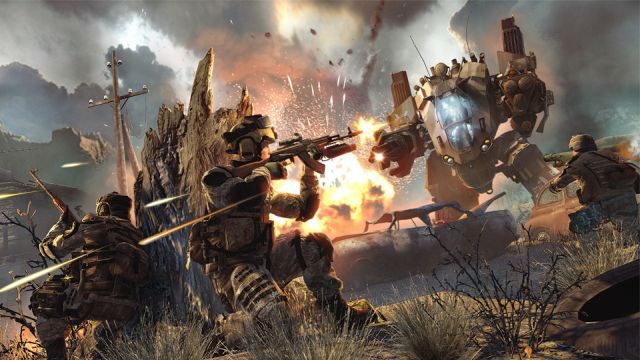 The ESA discourages the press from taking pictures inside the Los Angeles Convention Center before E3 2012 actually begins on Tuesday. However, we can report that while we were picking up our press badge for E3 2012, we happen to see a banner inside the convention center promoting Warface, the near-future themed free-to-play shooter from developer Crytek (the makers of the Crysis series of games).

We also happen to see another logo on that banner; that of Trion, the developer and publisher behind 2011's fantasy MMO Rift. That would indicate that Trion has secured the North American rights to publish Warface.

The game itself is being developed primarily by Crytek's Kiev offices with some help from Crytek Seoul and Crytek Frankfurk. Nexon has already announced it would publish Warface for South Korea and Taiwan.

There's no word on when Trion will launch Warface for the US market but we should learn a lot more in the next few days, along with hopefully some hand-on time with Warface. Crytek has two other announced games in the works; the FPS Crysis 3, out in 2013, and the still mysterious Ryse, the Kinect-based Xbox 360 game that was originally known as Codename Kingdoms which was announced at E3 2010.