The UKs Advertising Standards Authority has ruled against mobile network Three over one of its advertising campaigns, #makeitright. The particular advertisement (shown above) makes a claim that its network is the "UK's most reliable" and that it is an "undisputed" claim.

A rival network to Three, EE, disagreed with the company's claims, noting that it was misleading and could be substantiated, therefore decided to lodge a complaint with the ASA, as did a member of the public. After investigating the advertisement, the authority ruled against the firm, meaning the advert can never be shown again in its current form.

The authority detailed multiple reasons for upholding the complaint. It said that as the YouGov logo was not prominently visible and that it "could be overlooked by readers", it was not clear that the claim of being most reliable and undisputed were based on subjective consumer opinion rather than an industry-wide common scale of reliability, which does not exist.

As part of the complaint resolution, the authority outlined what the company can and cannot do in both this advertisement, and future campaigns: 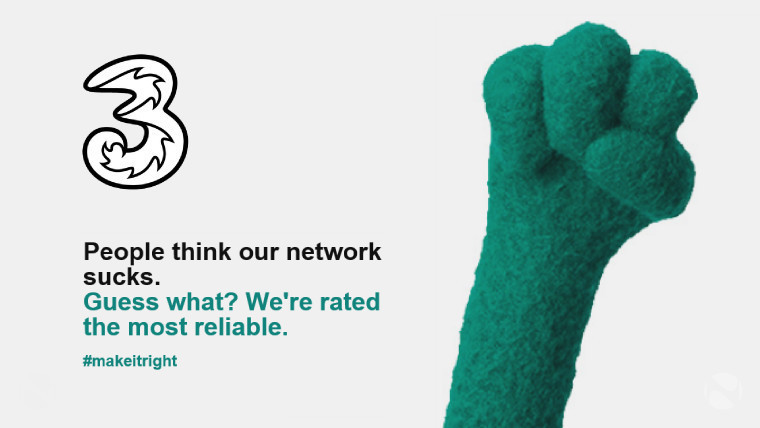 Following the case resolution, EE decided to continue its fight with Three over on social media. It took to Twitter to mock the network over its #makeitright campaign:

Hi @threeuk your undisputed claim has been disputed. The ASA says you have to #makeitright https://t.co/liTezUpjfK pic.twitter.com/NpQRJeen7Z

EEs snarky comment may have backfired, as it became a hotbed of complaints in response to the tweet, with customers complaining of delays in refunds, customer service failing to resolve account issues and an overall poor experience:

Being cocky on twitter isn't all it cracked up to be

@EE Followed by a support rep refusing to remove the Euro Pass from my account (they did in the end after much effort).

@EE @ThreeUK Every network is better than EE where I live. Signal=None Existent up to 1/4 mile away from my house. Useful? Not. O2&Voda work

Three, a subsidiary of Hutchison Whampoa, has not had a great time over the past few months. Today it was told that it cannot merge with rival network O2, as the EU blocked the merger proposal. Back in January, the network came under fire over "forced" price hikes to one of its most popular service plans.