The controversy over Microsoft searching through a person's Hotmail account in September as part of a company investigation has now gotten the attention of the non-profit Electronic Frontier Foundation. As you might expect, the EFF thinks that Microsoft's actions violate the U.S. Electronic Communications Privacy Act, 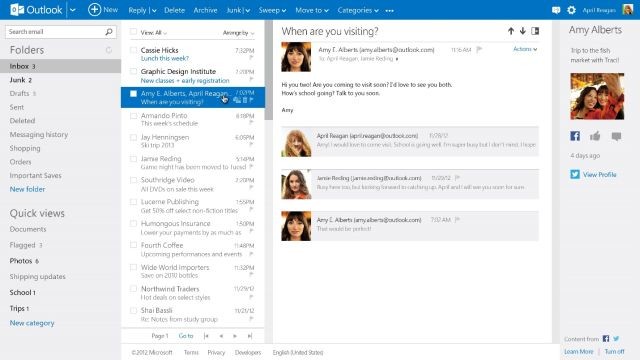 Microsoft admitted this week that as part of its actions to find evidence against a person who allegedly leaked Windows 8 files and other code to a third party, it examined some of the Hotmail account content of a French blogger who was in communication with the leaker, now former Microsoft employee Alex Kibkalo. Microsoft's Terms of Service for Hotmail and Outlook.com users state that the company has the right to search through those accounts if such actions are needed to "protect the rights or property of Microsoft or our customers."

The EFF believes, however, that Microsoft should have gotten a warrant to search the Hotmail account. Microsoft's argument is that "courts do not issue orders authorizing someone to search themselves," but according to EFF legal fellow Andrew Crocker it's the content of the emails on those servers created by a third party that is being searched.

To the contrary, if Microsoft’s independent legal team concluded that there was probable cause, it could have passed the tipster’s information to the FBI to obtain a warrant and conduct the search under the auspices of the criminal justice system. The warrant protections enshrined in the Constitution would be preserved, ECPA would be satisfied, and Microsoft could have claimed the high moral ground. Instead, Microsoft has opted for an internal corporate shadow court.

Microsoft has said it will be updating its policies on searching email accounts, which will include adding a separate legal team to determine if a search is needed, followed by sending that opinion to an outside attorney who is a former federal judge. That's not good enough, according to Crocker, who says it violates the Fourth Amendment right to have such evidence presented to a "neutral and detached magistrate."

Crocker also thinks that Microsoft's Terms of Service could be abused thanks to the specific wording. He stated, "Combined with the kangaroo court potential of the company’s new internal Warrants for Windows policy, Microsoft is playing with fire." So far, there's no word on if the EFF plan to launch any legal actions against Microsoft.