Eve-Tech is a Finnish company that unveiled its first 8-inch Windows 8.1 T1 tablet last year, which we reviewed favorably, praising it for its respectable specifications at a decent price. We also interviewed the company's CEO Konstantinos Karatsevidis to gain insight on Eve's upcoming hybrid Windows 10 device, which was being developed under the name "Pyramid Flipper". Now, the company has officially unveiled the name of the device, calling it the "Eve V".

The Eve V is a 2-in-1 Windows 10 device that was "crowd-developed" by a devoted community consisting of the company's fans. The specifications were largely decided based on the feedback provided by them. Now, Eve has announced that its hybrid device will officially launch on Indiegogo next month. 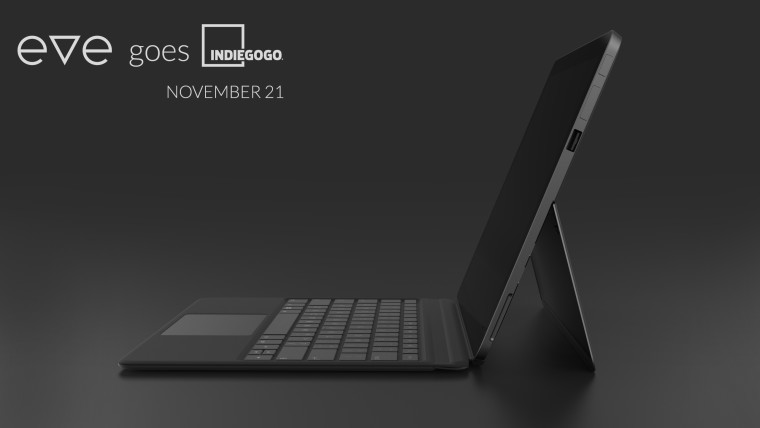 According to the company, the Eve V's Indiegogo campaign will launch on November 21, 2016. Initially, 500 units will be available for purchase, with the final product being available in early 2017. Eve also states that the device will be shipped globally.

Moreover, the company also says that the Eve V is currently in the "testing stages of development" and that prototypes will be shipped to community members soon. Eve says that its team consists of seasoned veterans from numerous companies such as Apple and OnePlus. It also claims that Intel is investing in the project, and that by funding the campaign on Indiegogo, customers will not be paying for the development of the Eve V, but for its manufacturing process.

The form factor of the Eve V is very similar to Microsoft's Surface devices, particularly because of the integrated kickstand. In fact, the company's CEO (jokingly) described the device as the "Surface Killer" to us in our interview. While the final specifications still haven't been decided, the tentative specs are as follows: