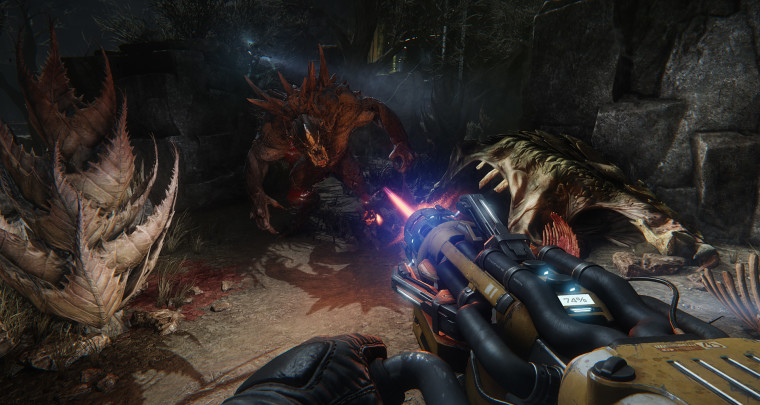 Turtle Rock Studios, creator of the Left for Dead series, are readying the launch of a brand new shooter.  Titled "EVOLVE", the class-based shooter is a multi-platform game that pits four player-controlled hunters against one player-controlled beast.  The game emphasizes team play between the four hunters and proper execution of each player's given role in order to take down an agile Godzilla-like creature, and the beta release has been confirmed for October 30, 2014.

Turtle Rock held an early alpha play opportunity earlier this year and are ready for some stress testing on EVOLVE, an event that Turtle Rock Studios are referring to as "Big Alpha".  While the game is meant to release on multiple platforms, Microsoft has reigned in the "Big Alpha" event as an exclusive experience on Xbox One, making that two notable betas to be experienced on Xbox One before the end of 2014.  Both PS4 and PC owners will want to find a friend with an Xbox One and an invite to the Big Alpha test as EVOLVE is shaping up to be one heck of a game.

For Xbox One owners that wish to give EVOLVE a try, there's a registration opportunity that's live right now via 2K Games' official website (or just click the source link and follow Microsoft's directions).  All you have to do is copy and paste the referral codes provided by the Xbox team and enter a few personal information pieces into the registration page and you'll be entered for an opportunity to participate in the "Big Alpha" event.  You'll also be entered for an opportunity to join the event a day early if you're selected from the pool of entries.