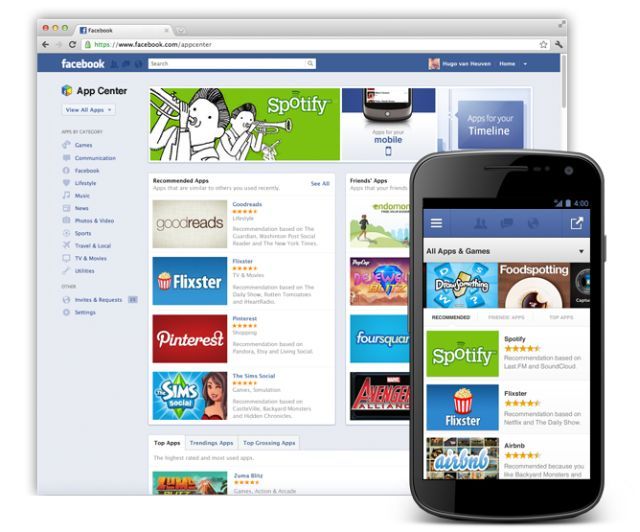 Facebook's new app center has launched, providing Facebook users with a centralized location to access applications. The store can currently be accessed through a browser or the company's iOS and Android applications.

The app center currently features more than 600 applications that come in both web and mobile-based varieties. Facebook will also allow paid apps to be sold through the store, as it previously stated when it announced the service early last month. Facebook's app center is currently rolling out for United States users today; it will continue rolling out to global Facebook users and be available to all Facebook members "in the coming weeks." Facebook is preparing to modify users' home pages to prominently display the new feature. According to The Verge, Facebook plans on adding a link to the app center on the top left side of the home page for all users.

According to the company's press release, the app center makes personalized recommendations to Facebook users (presumably based on their interests) and lets users brows applications their friends use. Additionally, the store features a "send to mobile" feature for mobile-based apps, allowing users to find applications on the desktop before installing them on mobile devices. If mobile apps require a download, users will be directed to Apple's app store or Android's Google Play service. Facebook will also only list "high-quality apps," according to the company.

Mobile has long been an issue for Facebook, as its monetization strategy on mobile devices drew criticism from potential investors when the company was filing for its IPO late last year and early this year. Last month the company launched a mobile camera app for iOS devices following criticism of its mobile app's camera feature. In April, Facebook agreed to purchase the mobile photo-sharing social network Instagram for $1 billion.