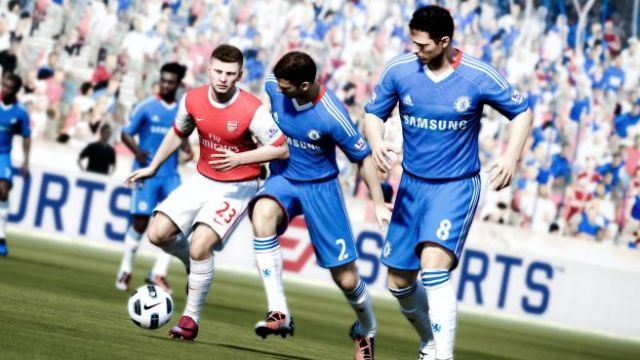 Fans of EA Sports' popular FIFA pro soccer game series can try out a small sample of the full version of the game. A demo is now available to download for PC owners and should also be available for Xbox 360 and PS3 owners later today in the US. You can download the PC demo directly from EA's servers. The 1.5 GB demo has six teams to choose from (Arsenal, Manchester City, AC Milan, Borussia Dortmund, Marseille and Barcelona) along with the Etihad Stadium. The demo is limited to Kick-off mode and three minute halves.

The full version of FIFA 12 (known as FIFA Soccer 12 in North America) is scheduled for release on September 27. Fans who have signed up for the EA Sports Season Ticket program will be able to download and play the full version of FIFA 12 for the Xbox 360 three days before the game's official release date. While they will still have to purchase the full retail version, the save games from the early downloadable version can be used with the retail product.

One big change for PC owners of FIFA 12 is that for the first time in several years the PC version will use the same graphics engine and have the same features as the PS3 and Xbox 360 ports. FIFA 12 has included the Impact Engine which offers better in-game physics and animation compared to earlier versions of the game. The online features have also been improved and a new addition called the EA Sports Football Club allows gamers access to worldwide leaderboards where they can track their achievements with other players.

The FIFA series of games have turned into a huge franchise for EA. The last game in the series, FIFA 11, has sold 15 million copies worldwide.

Thanks Zain Adeel who posted this tip in our forums.