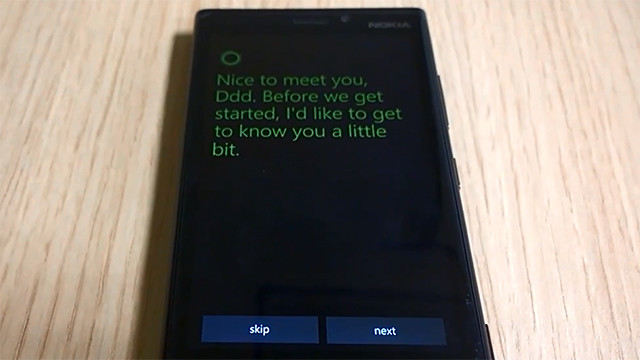 Well, that didn't take long: The first video of Microsoft's Cortana digital assistant for Windows Phone 8.1 has leaked just a day after the first images of the feature were also leaked.

Posted by UnleashThePhones, the video shows the general appearance of Cortana as well as many of its capabilities. One aspect not revealed, however, is what Cortana will sound like. A recent rumor indicated Jen Taylor, the voice actress behind the Halo franchise's Cortana character that the digital assistant is named after, will lend her skills to the feature.

As seen in the video, Microsoft describes Cortana as "a personal assistant on your phone, ready to help with reminders, suggestions, tasks and lots more." Cortana will require a Microsoft Account to function, and it will warn users before it collects information such as locations, contacts and email for its intelligent learning habits.

Users can set "quiet hours" for Cortana, which will stop notifications from being sent. An "inner circle" can be created to allow certain contacts to bypass quiet hours, however, or a busy message can be sent in response. The video also shows how Cortana will learn a user's habits by allowing him or her to select the two "most enjoyable parts of your everyday evening." It will also learn a user's food choices by asking the two most important aspects of food, such as "what's healthiest" or "what's most delicious."

The video doesn't show any sort of vocal prompt to request Cortana's help; instead, users will just press a button to use the digital assistant with natural language. As indicated by recent reports, a long press of the search button will also activate Cortana.

Microsoft is expected to formally unveil Cortana alongside the rest of Windows Phone 8.1 at its Build 2014 conference next month.