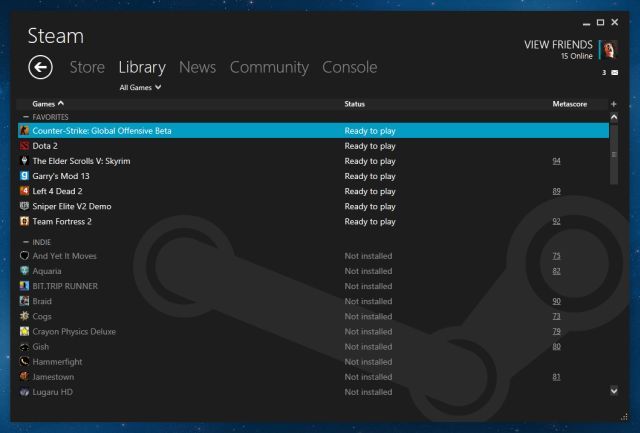 Windows 8 and its Metro interface have generated a lot of debate among Windows users. Now one person has decided to merge the Metro look with Valve's Steam client. One of Neowin's forum members, BoneyardBrew, has created a custom skin for Steam that makes it look like Windows 8. You can download the 1.0 version over at his DeviantArt.com page.

The effect is quite impressive and if you happen to be running the Windows 8 Consumer Preview the new skin will merge nicely with the operating system's interface. You can discuss the skin with its creator in our community forums.

Ironically, this Windows 8 skin for Steam comes as a recent report claims that Valve's founder, and former Microsoft team member, Gabe Newell reportedly slammed both Windows 8 and Microsoft in a recent meeting.

In the report posted this week on the Phoronix website about Valve's plans to port Steam to the Linux OS, the author of the story claims that Newell's " ... negativity for Windows 8 and the future of Microsoft was stunning." It's perhaps safe to say there won't be a Metro version of Steam anytime soon.

No matter if you agree with Newell or not, the Windows 8 Metro Steam skin is pretty impressive. Our hats are off to BoneyardBrew on his work.