Don't we all just love analysts? In a new forecast that has been published by Gartner today, the research firm warns that if Microsoft fails to capture key tablet and smartphone markets over the next few years, the company could basically become irrelevant. Apparently a huge, disruptive shift is on the way that will see the majority of people use tablets as their main computing device and that will cause Microsoft's OS share - both Windows and Windows Phone - to fall to around the same as Apple's iOS share by 2017. 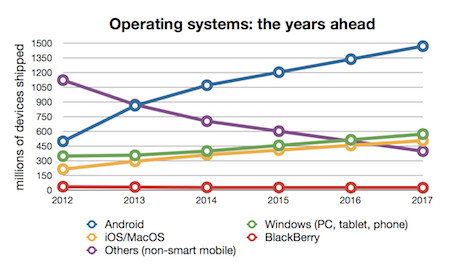 Carolina Milanesi, the analyst behind this research, believes that Android will get sales volumes "that are three times those of Windows" in the future, as Microsoft fails to successfully capture the interests of emerging markets. Milanesi believes that people who don't own PCs currently will look to a tablet for their first computer, and "Android or iOS are the two that they're looking at". This will cause developers to focus their efforts on the platform with the largest user base, which apparently won't be Windows.

Gartner predicts that by 2017, the shipments of Android devices will vastly outnumber any other operating system on the market, while by just 2014 we'll see Android on more than a billion devices. BlackBerry will continue to slide in overall shipments to end up well behind Windows Phone, and in 2015 tablets will outsell more traditional PCs such as notebooks and desktops. "Winning in the tablet and phone space is critical for [Microsoft] to remain relevant in this shift", says Milanesi.

Of course this is simply an analyst's prediction of the future and quite often they turn out to be wrong. Microsoft is working hard with Windows Blue to improve the experience they introduced with Windows 8 and the overall unification of Microsoft services could serve them well in the future. Whether they'll slip so far behind Android remains to be seen.