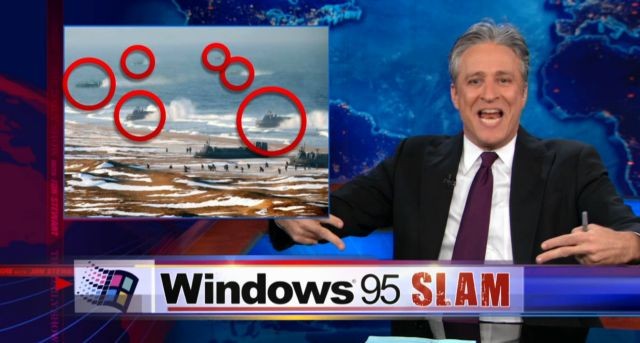 It's not often that Windows 95 shows up in current pop culture or comedy skits, but Comedy Central's The Daily Show on Tuesday Night brought back memories of Microsoft's 1995 OS in its first segment on Tuesday night that centered on the growing saber rattling from North Korea.

At one point, The Daily Show references a news report that shows a North Korean picture of troops using hovercraft to land on a beach, and then saying that experts believe that much of the image was in fact "Photoshopped". Daily Show host Jon Stewart then takes even more of an issue with the photo, claiming that the image looked like it was made in "MS Paint".

Stewart then proclaims himself to have generated a "Windows 95 Slam", complete with a large and somewhat obnoxious graphic ... at least until the familiar "blue screen of death" then appears to cut Stewart's report off. Stewart then is heard behind the blue screen apologizing for his joke and admitting that Windows 95 was in fact a "revolutionary operating system."

Apparently, The Daily Show's version of Windows 95 is sentient, and a little insecure, because it took away the blue screen of death after Stewart's apology. We wish it were that simple to get rid of that screen.