OSnews points out that Google has decided to purposely remove the https:// from current development builds of its Chrome browser. The change was noticed when a user reported it as a bug in the issues section of the chromium Google Code page. A coder then responded that this is a new "feature" and not a bug. Many of the comments that followed were of negativity. People don't seem to be too fond of the https:// removal.

One issue that could arise from the omittance of https:// is that applications requiring this part of the URL will be left in the cold. However, Google is apparently taking care of by adding the https:// part to the clipboard for when you copy and paste URLs to and from the URL bar (still a work in progress). This is an interesting solution and it remains to be seen how effective it will actually be. So far, users are complaining that this completely breaks standard clipboard functionality, causing ill effects.

While Google might be leaving https:// high and dry, not-so-distant cousins, ftp:// and https:// will continue their welcomed stay in Google's speedy little browser. Many are saying that this is confusing, inconsistent, and should not be done. In any case, users rarely type https:// in the first place. Google seems to be feeding off of this fact. However, before such a "feature" can become the norm, the public (not to mention other browsers) will eventually have to accept it. 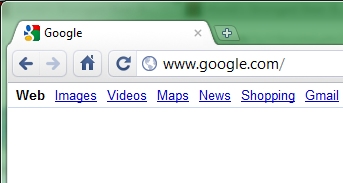