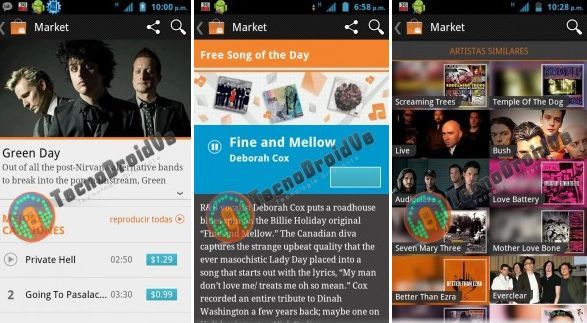 With rumors that Google will finally announce its Google Music download store sometime later this week hitting the Internet, there's also activity on the screenshot front. The Spanish language web site TecnoDroidVe.com has posted up what it claims are images showing the user interface of Google Music running in the Android Marketplace. Google recently revamped the Marketplace to allow downloads of movie rentals and eBook purchases along with app downloads.

It looks like Google will offer users a free "song of the day" selection daily from the Music section of the marketplace, if these screenshots leaks are correct. It also looks like the overall user interface will blend seamlessly with the revamped UI of the Android marketplace. Pricing for songs also seems to vary if the images are correct, although the prices shown in the screenshots may just be placeholders.

Google is expected to reveal the new service in a press conference that will be held on Wednesday, but at the moment it's not clear if the music store will also launch that same day or if it will be released sometime later. Offering Android smartphone and tablet users an easy way to download music tracks will certainly help Android to compete with Apple's iTunes service. However, it's not yet clear if all of the major music publishers will sign on to support the new Google Music Store.

Thanks to the forums who alerted us to the screenshots