Uncontent with ranting about Apple's use of coal generated energy, two Greenpeace activists ended up behind bars today after they decided to set up an obstructive demonstration in front of Apple's Cuptertino headquarters, according to Yahoo News.

After spending the night projecting anti-Apple messages onto the front of the building, the demonstrators donned 'iPhone costumes' (sorry folks, no picture – we tried, believe us, we tried) and shut themselves inside of a 'pod' bearing the Apple logo. The pod was apparently re-purposed from its previous duty of protesting Arctic oil drilling. Yep.

Phil Radford, the executive director of Greenpeace USA, said that the demonstration was in response to Apple's ignoring “the hundreds of thousands of people asking them to use their influence for good by building a cloud powered by renewable energy.” Apple, of course, says that they're working to do just that, and contends that the North Carolina data center that powers iCloud is one of the most efficient in the world. 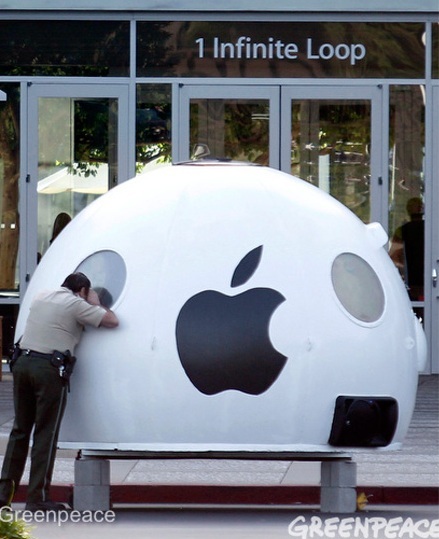 Despite the fact that Apple is apparently destroying the planet and using dangerous nuclear power, Radford still loves to give Apple his money. “As Apple's customers, we love our iPhones and iPads, but we don't want to use an iCloud fueled by the smog of dirty coal pollution.”

And despite the fact that two of the four demonstrators ended up being arrested, a spokesperson said that Apple employees coming into work were amused by the costumes, noting that they managed to elicit “a lot of smiles and laughs.” We're going to assume that Tim Cook was not one of those employees.

This isn't the first time that Greenpeace has staged a demonstration against cloud data center energy usage: last month they staged a major demonstration against Amazon and Microsoft when they mounted a massive banner on the side of Amazon's unfinished Seattle office. Like Apple, Microsoft is confident that they'll meet Greenpeace's demands in the future, aiming for 'carbon neutrality' by July 1st, while Apple is hoping to get 60% of their North Carolina data center's energy from renewable sources in the near future.