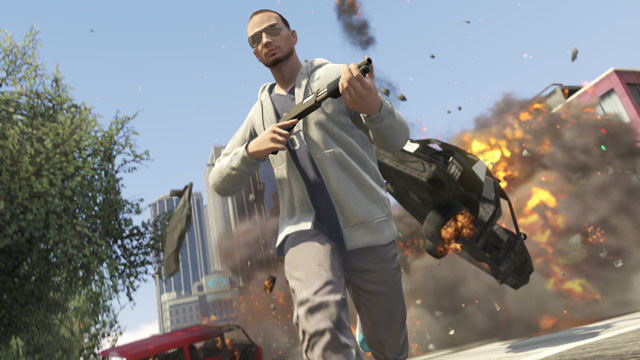 The release of Grand Theft Auto V for Sony's PlayStation 3 and Microsoft's Xbox 360 consoles in September was a massive hit for publisher Rockstar Games, as it generated over $1 billion in sales in its first three days of release. However, gamers were only able to check out the single player campaign for the game. That changes today with the scheduled launch of Grand Theft Auto Online.

In a post on the Rockstar Games site, the publisher said that access to GTA Online will be available for all GTA V owners at around 7 am Eastern Time. It will require downloading what Rockstar calls a small Title Update via PlayStation Network or Xbox Live, depending on the game's platform.

Once that's done, players can go online to participate in a number of multiplayer online modes that support up to 16 players. In terms of GTA V's storyline, GTA Online takes place a few months after the end of the single player campaign. Players can join together online to do, well, pretty much anything from going to see a movie to robbing convenience stores and more. Players will be able to take on a number of "jobs" (i.e. criminal missions) that can only be accomplished online.

There will be ways to race the many air, sea and land vehicles in GTA Online. There are also other sports such as golf, tennis and more to explore. Earning money can allow players to customize their character or vehicles. GTA Online does support micro-transations to purchase in-game items but this is not necessary to play the game; it just makes getting the items a little quicker than normal.

Rockstar is already warning GTA V players that it expects to see what it calls "growing pains" in GTA Online after it launches in terms of bugs and performance issues. It states, "This sort of thing is inevitable in a massive open-world game and there’ll surely be lots more unexpected oddities like this in the Online world ...". It asks that players alert them to bugs and issues once they have been discovered,