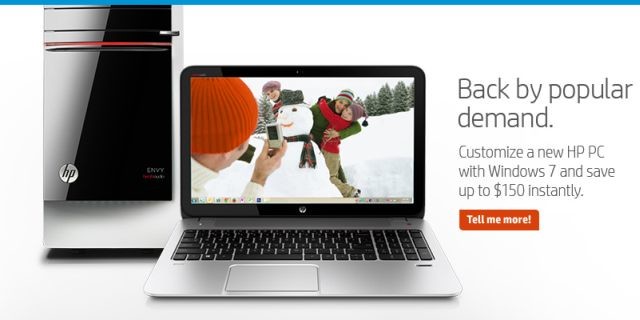 Microsoft may be attempting to get people to buy PCs with Windows 8.1 installed, but it appears HP is trying to appeal to buyers who want to stick with the older Windows 7 operating system. HP's home page is currently spotlighting a sale of Windows 7 computers, and uses the term "back by popular demand" as part of its pitch.

The fact that HP's website is now openly selling Windows 7 PCs to regular consumers, well over a year after the launch of Windows 8, may hint that the company thinks offering the older OS on some of its systems might be a better selection than Microsoft's newest software.

So far, it appears that HP is the only OEM that is actively promoting the sale of new Windows 7 PCs. Other companies like Dell, Lenovo and Acer also have options to purchase PCs with Windows 7 pre-installed but they are well hidden on their sites and are usually targeting the business customer, while HP's promotion is for home and home office consumers.

A few weeks ago, Microsoft confirmed that while new retail sales of Windows 7 as a separate software product ended on October 30th, 2013, sales of new PCs with the OS pre-installed still don't have a specific end date.

Thanks to Neowin reader Frank B for the tip in our forums.