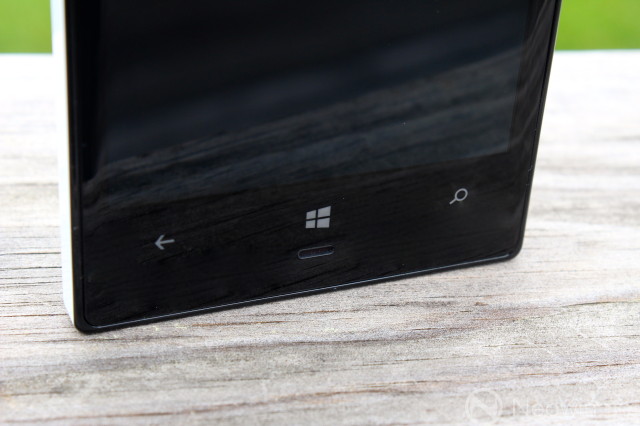 Aside from the notable achievements, and we call them achievements because getting developers to adopt to your new platform is never an easy task, especially landing key first party apps such as Instagram, Facebook and Twitter; trending analysis shows consumers are warming up to the platform. How do we know consumers are looking into the platform? That’s easy, Google Trends.

If you wonder why Google Trends is an important indicator of market acknowledgement of a platform, it’s because Google has a commanding lead of all Internet based searches.  Because Google is able to gather such a wide base of search queries, it can be used as a representative sample of the market, and when we start to look into Windows Phone, the data paints a positive picture.

If we start with the macro, you are able to see the obvious trend. The growth of Windows Phone based searches is growing steadily and this is exactly what you would expect to see. But, there are instances of new products (from old companies) falling away after being on the market for several years (such as Blackberry) so the fact that Windows Phone exhibits such a solid climb at the macro level, is a good sign for Microsoft.

When you start to close in on the micro, the trending is still apparent, although not as significant when you take a look at the entire picture. Over the last two years, interest in Windows Phone, based on Google search trends, has continued to climb at a moderate pace. While not the ‘hockey stick’ style growth that many would love to see, it’s still progressive and consistent growth. 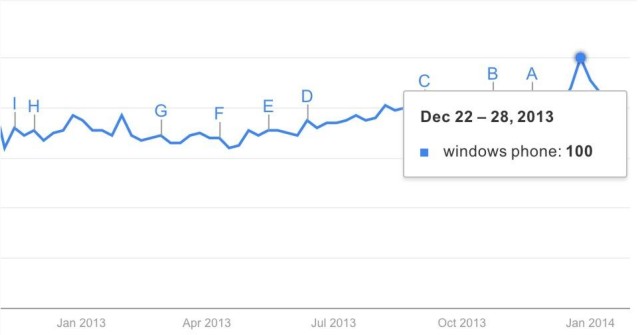 One of the key takeaways here too is that Windows Phone saw its highest level of interest in December of 2013. Specifically, the week of Christmas Windows Phone hit its peak since the platform has been introduced. This is significant for many reasons, one of which means that they had a very strong holiday shipping season.  Secondly is that their holiday marketing efforts likely paid off. While we have to wait another week or so to hear the official earnings from Nokia and Microsoft, we suspect that Nokia will acknowledge another strong quarter of sales.

Finally, when we look at the trailing 12 months, we can see that Windows Phone is still on the rise, the growth is not substantial but it's consistent, which is key for Microsoft.

Why is it key? Well, at this point the company’s internal expectations are that it’s going to be a long road to a significant marketshare position and not an overnight explosion of growth. Seeing that Windows Phone is still trending upward, even at the micro level, is a good sign for the platform.

You might be thinking that this slow growth is not all that impressive. But remember, the smartphone market is one of the most saturated markets on the planet. With several strong platforms and the fact that Microsoft is playing catch-up, they are showing that they do have the muscle to be relevant in any market that they enter.

If you need evidence that this market is insanely competitive and that getting consumers (and developers to switch platforms) is quite hard, take a look at webOS or even BBOS. With webOS completely dead and BBOS struggling to remain relevant, the smartphone market is not one for the weak and with Microsoft showing consistent growth over the macro picture, it’s certainly a good sign for the company.  Both of the companies backing webOS and BBOS had significant cash pools to support the platforms, but in this case you need a lot more than money to have a consumer-adored smartphone OS.

So what does all of this mean? It means that Windows Phone is gaining consumer acknowledgement, it’s becoming part of their vocabulary when they discuss smartphone platforms, and that is a huge win for Microsoft. We still continue to hear about poor sales experience from around the US about smartphone sales folks steering consumers away from Windows Phone, but when the consumer starts asking for a Microsoft platform in a market that they were lagging for many years, it’s a win by any measure.