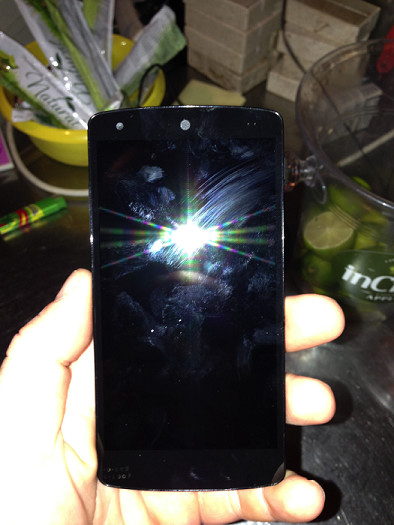 Google has recently announced the next version of Android to be "KitKat", and an unannounced Nexus device has already leaked in spy shots running the software.

A Nexus phone, allegedly owned by a Google employee, was photographed at a bar, and the images and videos have been posted to the Internet by 9to5Google, which claims the photos were taken while the phone was left unattended for charging. Judging by the Google-inspired hardware design language, this could be the much-awaited Nexus 5.

The upcoming device's specifications have also leaked partially by its FCC filing and GFXBench results. It is revealed to have a 1920x1080 resolution display (including on-screen buttons) running on a 2.26GHz Snapdragon 800 processor with 2GB of RAM. Additionally, this smartphone is expected to come with 7-band LTE, which hasn't been included in any previous Nexus phone. Some of the alleged specifications for this phone include a 5.2-inch screen and a 13MP OIS camera.

These leaks have started coming out just as Google has marked the Nexus 4 as "out of inventory" from the US Google Play Store with no plans to restock, according to a report by The Verge. Google is rumored to be holding a Nexus event mid-October to launch Android 4.4 and Nexus 5, so the wait isn't a long one for stock Android enthusiasts.