Images of what is claimed to be the upcoming Samsung Galaxy Tab S 10.5 have been leaked online. The device, unconfirmed by Samsung, will join the company's Android tablet line-up for 2014 and its 10.5-inch 2560x1600 display will make it the first Samsung tablet since 2012's Galaxy Tab 7.7 to use an AMOLED panel.

Although the device is 0.4-inches larger than the current Galaxy Tab 10.1, it looks very similar to the outgoing model and at first glance you would be hard-pushed to notice the difference. The images, revealed by tipster evleaks, show that the rounded, tapered edges remain from the Tab 10.1 and the overall form factor is nearly identical. 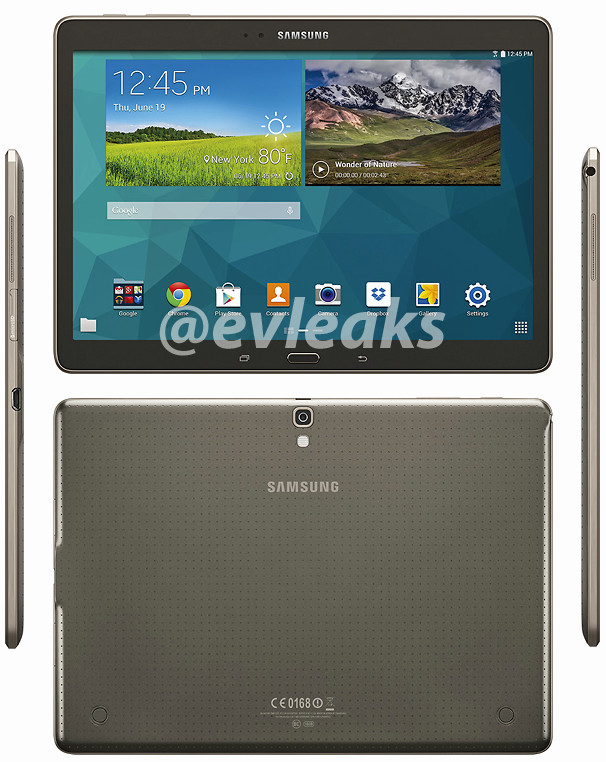 There are some changes, however. For starters, the Samsung logo has moved to the top of the device and the front-facing camera has been shifted to the left to compensate for this. The change was required because of the new inclusion of physical hardware buttons for Android's home, recent apps and back functions, visible in the photos.

It would appear as though Samsung no longer favours Android's onscreen controls on tablets. It seems a logical choice, however, as all of the company's Android phones have physical hardware buttons on the screen bezel.

This isn't the first time that images of the upcoming tablet have emerged though. Recently, TechRadar showed photos of the device acquired through FCC testing procedures. Today's images show the unit in its black colour form and also turned on, however, which is arguably more interesting than standard FCC shots.

Although nothing has been confirmed hardware-wise, the tablet could well boast an Exynos 5 octa-core processor comprising a 1.9GHz quad-core Cortex-A15 and separate 1.3GHz quad-core Cortex-A7. This will most likely be paired with 3GB of RAM and will run Android 4.4.2 KitKat, overlaid with the latest version of Samsung's TouchWiz UI customization software, out of the box.