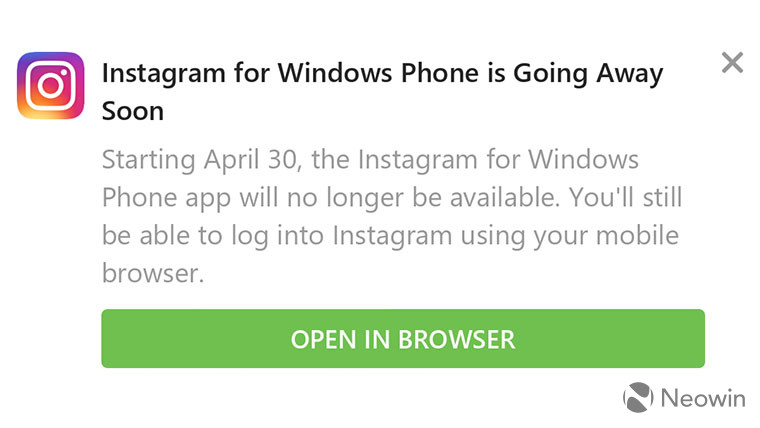 If you've opened the Instagram app on Windows 10 Mobile today, you may have noticed that there's a message saying that the app will be discontinued on April 30. As you can see from the image above, the notification suggests that you log in with a web browser instead.

Built with Facebook's own cross-platform development tools, this change does not affect the PC version. Despite the fact that both apps are under the same Store listing, Windows 10 PCs are not seeing this message.

While you can easily pin the Instagram web app to your Start Screen on your Windows phone, there are plenty of third-party alternatives out there. Users on Reddit, who initially spotted the change, have pointed to apps like Winsta and 6Tag.

Of course, at this point, users are likely considering switching platforms altogether. Support for Windows 10 Mobile version 1703 ends in June, while support for version 1709 ends in December. All Windows Phone 8.1 devices that were upgraded to Windows 10, with the exception of the Lumia 640 family, were limited to version 1607, which is already unsupported.