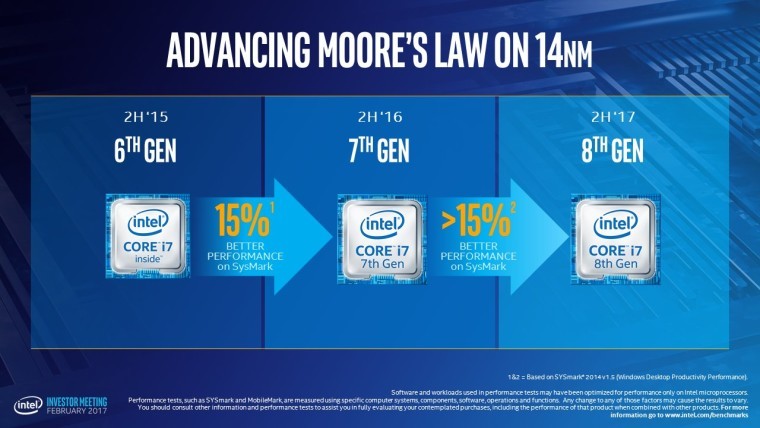 At a recent Investor Day, Intel finally gave us a formal launch window for its upcoming 8th generation of Core CPUs, dubbed Coffee Lake this time around. Expected to launch in the second half of 2017, the Coffee Lake update to the current Kaby Lake processors will offer an expected 15% bump in performance over its predecessor, though it will still be based on the same 14nm process.

That this will represent the fourth generation in a row based on the 14nm process may be a sign of Intel's growing troubles in keeping up with Moore's Law, which suggests die sizes would shrink in half every two years. Increasing complexities with the smaller chips have presented significant challenges in allowing manufacturers to keep up with Moore's Law and, indeed, Intel last year abandoned its former tick-tock model of releases based on Moore's Law in favour of a Process-Architecture-Optimisation cycle that spans three years before a shrink in the die size.

Coffee Lake will represent a departure from Intel's stated plans for the new release cycle as well, being the fourth generation based on the 14nm process first introduced with Broadwell.

Apart from the performance bump, the only other difference between Kaby Lake and Coffee Lake will be the release of a six-core CPU as part of the standard lineup of CPUs, a feature currently reserved for the higher tier Xeon and Extreme Edition lines.

While the company also has a range of processors dubbed Cannon Lake based on a 10nm process in the works, there is no release date currently and language from Intel suggests consumers may not see a die shrink for some time to come, as the company may diverge its offerings between enterprise and consumers, offering the former the newer chips first.