As the official launch of Windows 8 draws ever closer, attention is increasingly turning to the first generation of devices that will run the new operating system. With the ‘Release Preview’ version of the OS expected to arrive in just a few weeks’ time, giving us our most feature-complete view of Windows 8 so far, it’s to be expected that eager fans will want to know what hardware they can look forward to purchasing when the OS officially launches towards the end of the year.

It’s still not clear exactly when Microsoft plans for Windows 8 to go on sale, but it’s been widely expected that the launch would happen around October. A report from CNET (via @maryjofoley) seems to be roughly in line with that assumption, claiming that Intel-based Windows tablets will be available in stores in November.

The unnamed “source familiar with device makers’ plans” said that all of the first-gen Intel devices will use the company’s new Clover Trail processor – Intel’s first dual-core Atom chip using its 32nm manufacturing process, which is itself a development of the single-core Medfield processor that Intel has developed for use in smartphones. 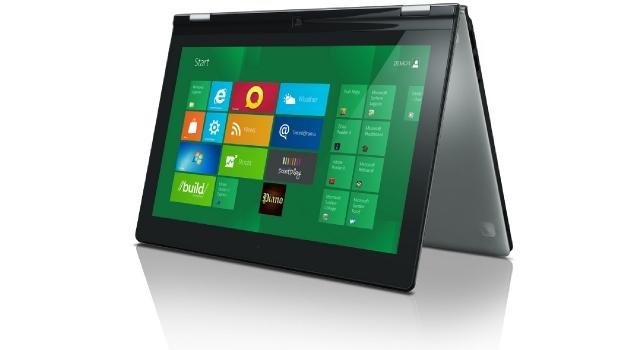 The same source states that there will be “more than a dozen” Intel-based Windows 8 devices in the first wave, and that “more than 50 percent” of these will be more exotic than just the traditional ‘slate’ tablet form factor, including hybrids and convertibles similar to Lenovo’s IdeaPad Yoga (pictured above - and be sure to check out our hands-on video with it), or the Samsung Sliding PC 7 Series, previewed at CES 2011, but which never made it to market (below).

A November launch window for the new devices would be see them arrive in stores just in time for the critical holiday season, but they'll face increased competition from a new wave of devices. Android 5.0 (possibly named 'Jelly Bean') is expected before the end of the year, and will likely usher in new tablet hardware, while RIM's PlayBook will get a new lease of life with the arrival of its new BlackBerry 10 OS.

Apple is also expected to launch its next-generation operating system, iOS 6, this summer, bringing improvements and new developments to its recently updated iPad hardware. There are also persistent murmurings of a seven- or eight-inch 'iPad mini' arriving this year.

To put it simply, there'll be plenty of competition for the first Windows 8 devices when they go on sale in a few months' time - but that just adds to the excitement. Frankly, we can't wait for it all to kick off.