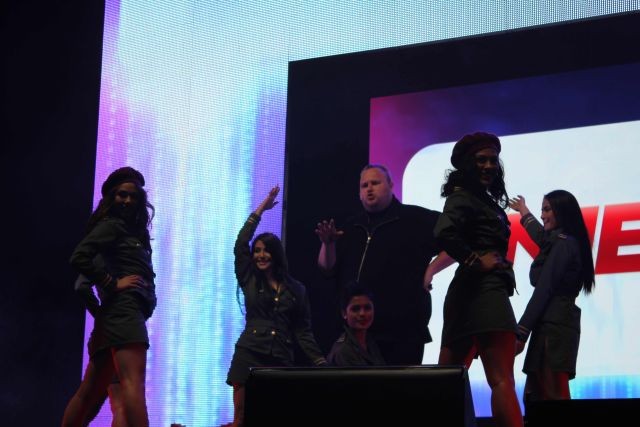 On Saturday, the general public was able to sign up to use Mega, the much hyped successor to the MegaUpload file sharing website that was founded by the controversial Kim Dotcom. Mega's servers immediately buckled under the pressure as over 100,000 people registered for the service within an hour after it launched.

On Sunday, Dotcom held his official launch party for Mega at his New Zealand mansion; on the same day one year ago that location was raided by U.S. and New Zealand law enforcement officials who arrested Dotcom on online content piracy charges. The Next Web reports that during the event, Dotcom claimed the new Mega service had already reached the one million user registration mark.

The Mega launch event was, as expected, quite a spectacle, with models dressed up in para-military uniforms surrounding Dotcom on stage. A recreation of the raid on the mansion in 2012, complete with helicopters, was also part of the festivities. Even with all of these theatrics, Dotcom said at the conclusion of the event that he will not be making as many public appearances from now on, aside from upcoming court dates.

Mega is currently offering users access to 50 GB of file storage space for free, with additional storage and bandwidth available for a fee. Dotcom said during the Mega launch press conference that the service has been "built from the ground up to adhere to the law.” Only time will tell if Mega will suffer the same fate as MegaUpload.