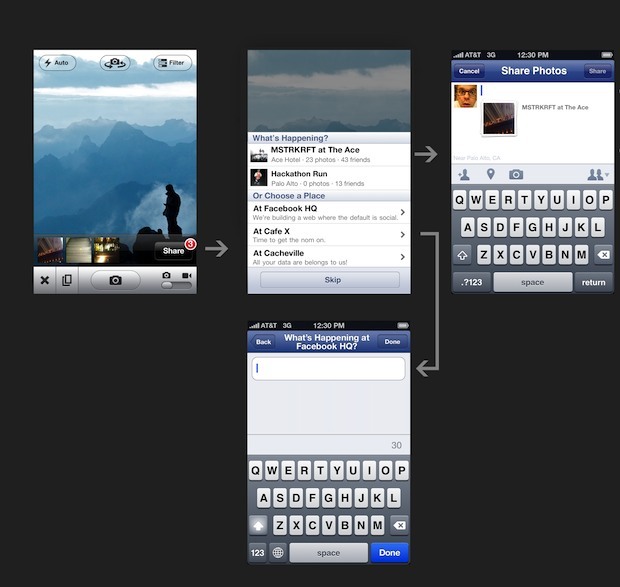 Facebook's new iPhone app, rumored to be codenamed "Hovertown", has been leaked to the press. Focusing on taking and sharing photos, the app allows users to take, upload and tag photos in a much simpler interface.

According to TechCrunch, it's unclear as to whether this project will reside in the official Facebook app, or whether it will exist separately. Leaked material suggest it could go either way, which may indicate a current internal conflict on how to best introduce the project.

The new app is simple. Photos are taken, dropped into a bar near the bottom of the screen, and grouped together with a single "Share" button. Photos can now be uploaded in a batch, as well as associated with a single location or event in one action.

The leaked screenshots contradict themselves in some places, which could mean that the UI navigation is still being worked out. One of these areas is with photo browsing. One screenshot shows a calendar view of recent photos, whereas another shows photo albums, and another shows a mix of both photo albums and recent friend tags. Assuming the project sees the light of day, questions like these should hopefully have been answered before launch.

Facebook's app comes soon after the announcement of Twitter integration into iOS 5. While the idea that the new app is a response to that is a valid interpretation, the app also comes at a time when Instagram is slowly but surely picking up users. Either way, Facebook has definitely begun to place more emphasis on mobile sharing, and ideas such as these, are hopefully the start of some innovative new ideas in the Facebook iPhone app.