Lately, a fierce debate has erupted online over the dreaded loot box that can be found in many high profile games, including the recent Forza Motorsport 7, which allows the player to purchase a 'crate' that contains random items, much like how a lottery works. However, not all of these are innocent, with Middle-earth: Shadow of War allowing the player to throw real-world money into the mix to 'make the game easier'. 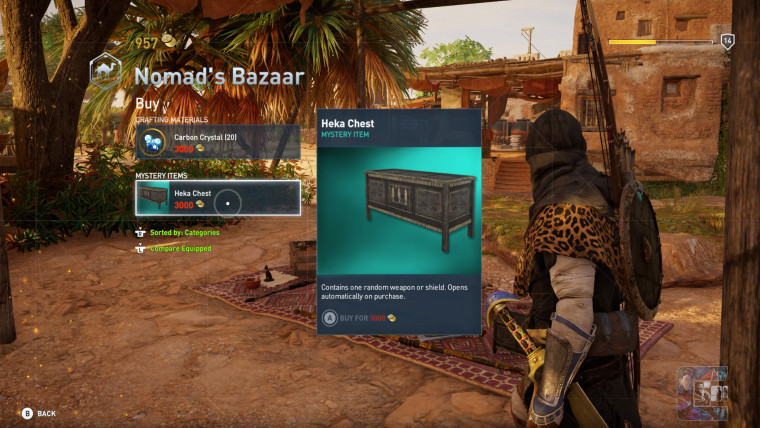 Even though the Assassin's Creed franchise has always contained some form of in-game currency and micro-transactions; these have been limited to being cosmetic. In some rare cases, it would also make your character overpowered - see Assassin's Creed Unity - which made any foe you encounter a breeze to deal with.

Spotted by a user on NeoGaf, it seems that Ubisoft is embracing the 'year of the loot box', and will integrate this into its upcoming game set in ancient Egypt. Although these can seemingly only be purchased with in-game currency, it remains to be seen if the developer will allow the player to buy more of these using its own virtual currency called 'Helix Credits'. Prior games have featured these credits prevalently, and in some cases, have even aided in walling off specific gear, forcing the player to spend additional money to gain access to them.

The aforementioned loot box will contain a 'mystery' weapon or shield, which again will be chosen at random. It's not known if the player will be able to find these items in-game for free, or if they are exclusive to these Heka crates.

Assassin's Creed Origins launches October 27 on Xbox One, PlayStation 4, and PC. Recently, Ubisoft announced the PC specifications, and Microsoft unveiled its exclusive bundle including the aforementioned game and the 1TB Xbox One S. Beyond that, the game will feature - for the first time - an education mode, where the player can explore and learn more about Egypt during that time period.