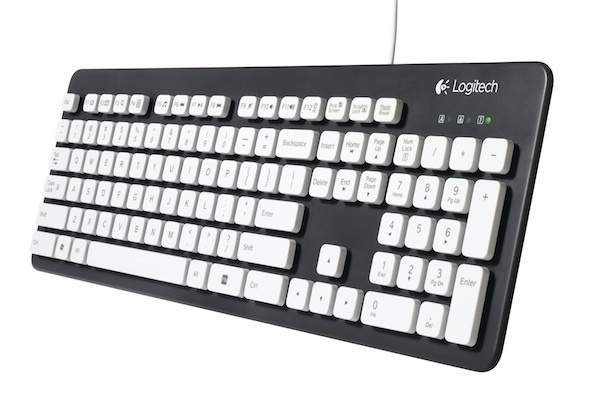 White on black is surprisingly good looking, and the K310 looks rather pretty.

Keyboards are an important part of any computer, for they're likely to be the thing you're interacting with most frequently. This means they're also going to be getting more wear and grime built up than most other external parts of a computer.

Cleaning a keyboard is possible, but it's not the most enjoyable job on the planet. Different advice and products are available to make it an easier task, but there's no guaranteed way to make the process easy.

Logitech might have the solution, in the form of the Washable Keyboard K310. It's a washable keyboard; exactly what it sounds like. You can even take it eleven feet underwater and still have it work, if you somehow need that functionality.

Characters on the keycaps are laser-etched, so should last for a long time. Laser-etching is very hard-wearing, so their markings should survive for years to come. They might never even fade at all, and that's an important consideration when you have to wash the keyboard.

There have been stories of mechanical keyboards surviving a trip in the dishwasher, but I'm not sure if I would ever recommend that as a solution. One of Macworld's reporters attempted this back in 2009, subjecting his Matias Tactile Pro to a deep cleansing. Washing a keyboard in such a manner would normally put it out of commission for a few days, but if it saves your preferred bit of hardware from being binned, it's worth a shot.

It is worth pointing out that Logitech aren't changing the market with this product. There have been washable and dishwasher-ready keyboards produced in the past - some of which currently retail for a lower price than the K310 is estimated at - but none of them tend to be designed in the same style.

If you're looking for a washable keyboard it might be worth waiting on the K310 to release, so you can decide with the entire market at your fingertips.

The K310 is due to release in the United States during August, at a retail price of $39.99. European buyers will have to make do with their current keyboards until October.