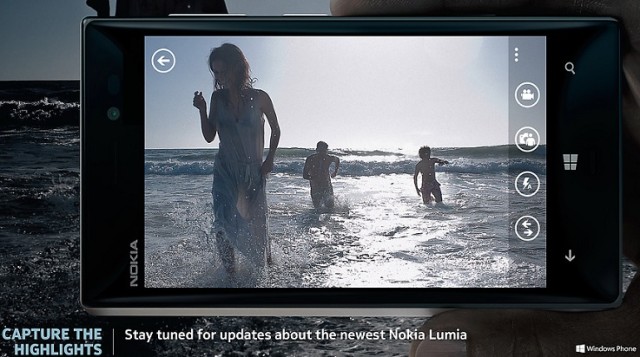 The Lumia 928 is expected to launch in the next few days and so far Nokia hasn't done the best job in keeping this phone a secret. From leaked images shot with the phone to seeing the phone itself at a private Nokia concert to full blown banners in the streets, the Lumia 928 is now well known to the public.

And you can add two more public displays to that list: Nokia's own website that now shows a banner promoting a new phone which is not named, though the URL ends in "lumia928", and a whole page ad in Vanity Fair, with the same image from Nokia's website plus the moniker Lumia 928. The Vanity Fair ad is promoting the device's photographic capabilities even in low light.

The 928 is a refreshed version of the Lumia 920 destined for Verizon and perhaps a few other carriers. It is rumored to arrive with a slimmer polycabornate body than its 920 cousin and it's been officially confirmed that the phone will feature Nokia's Pureview and OIS technologies as well as a new Xenon flash. The device is also expected to launch with a 4.5-inch 720p AMOLED screen and an 8-megapixel camera on the back.

So far this whole thing seems to have been a deliberate plan but we'll have to wait and see if Nokia's gradual leaks got people excited about the new device.