Without further ado, we'll hand you over to mightyzero, who only this morning submitted his take on the Nokia Lumia 925, a phone we have also reviewed.

I was an early adopter to the Windows Phone platform. My first phone smartphone was the HTC HD7 as I initially resisted the smartphones on the market, but loved the build quality of HTC and was genuinely interested in what MS was doing.

I purchased the HTC Radar for my wife approximately 6-9 months later. After enjoying my HD7 for 2 years I decided to try a Nokia and all the extra software goodies that come along with it; plus, I really wanted to be on Windows Phone 8. Being a T-Mobile customer, my only options for WP8 were the Nokia Lumia 810 or HTC 8X. The 8X seemed like the better option at first but lack of SD slot coupled with the dark purple color kept me from pre-ordering. I wasn’t nearly as interested in the phone after playing around with it in the store and ultimately went with the less flashy but equally capable Lumia 810.

While I was enjoying my new Nokia and WP8, my wife was busy breaking her HTC Radar. Knowing that Nokia was working on a 92x variant for T-Mobile, I decided to buy my wife a Lumia 521 to hold her over while I waited for the launch of the 925 (and ultimately, moving my wife onto the 810). 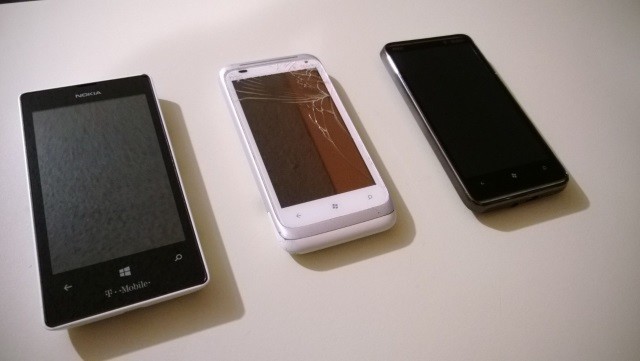 My point of reference for comparison is based mainly on my experience with these earlier Windows Phone devices.

I picked up the Nokia Lumia 925 on launch day and was instantly pleased with the aesthetics and general feel of the device. It's light and comfortable to hold in the hand. The uni-body design is sleek and instantly feels premium. Granted, I have rather large hands, so while an iPhone 5 feels really light and a little small in my hands, the Lumia 925 has that just right feeling... not too heavy but not too light. The 4.5" screen also feels like a sweet spot for screen sizes. I know that's probably just my taste, but I've had a couple friends specifically mention that they really like the screen size.

My first reaction upon starting the phone was: "Wow... that screen looks nice!" Easily the best looking screen of any Windows Phone device I've used or had a chance to play around with.  Another welcome change from other devices I've used is the micro USB port and 3.5mm headphone jack are both located on the top of the device. Considering I use my device as a MP3 player, it was very awkward to have both plugged into a device (one on top the other on the bottom) and sit neatly in my car console. This is one of those small changes that feels natural.

Read the rest of the review ->