Among the many revelations about Windows 8 at BUILD this week came further confirmation from Microsoft that x86 applications won’t run on hardware powered by ARM processors.

In a Q&A session with financial analysts on Wednesday, Windows president Steven Sinofsky highlighted the fact that Metro style applications can be easily reworked to support ARM or x86, but avoided discussion of how existing x86 applications might be ported to ARM through emulation or virtualisation methods.

Thisismynext.com believes that Microsoft hasn’t yet told the whole story about its plans on that front, pointing to comments made to them by Mike Angiulo, vice-president for Windows Planning, who said that “porting things and whether we open native desktop development are decisions that are either not made or not announced yet”.

One major product that will need to be ported to ARM is, of course, Microsoft Office. Microsoft showed a version of Office running on ARM hardware (apparently identical to the x86 version) at CES. On that subject, Angiulo said that Microsoft “didn’t make the promise of shipping it or announce a SKU, but I showed it running, so you do the math”. He then added: “You have potentially an Office solution that’s ‘real Office’, and you have all these Metro style apps; you almost start thinking, at what point is it not confusing anymore?” 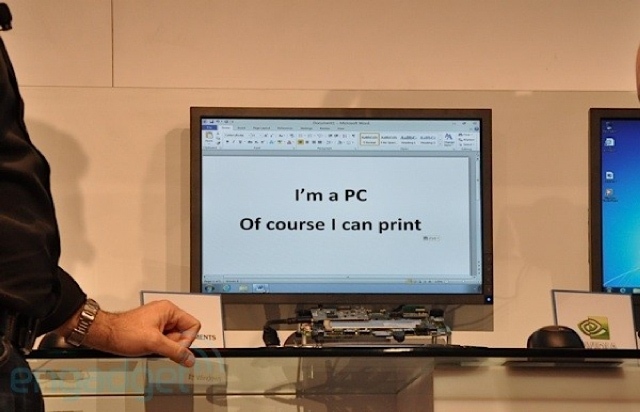 Angiulo’s implication would appear to be that Microsoft still plans to bring a full version of Office to ARM, and that a Metro implementation is also on the cards – and that assertion is supported by comments made by none other than Microsoft’s CEO, Steve Ballmer, in Wednesday’s Q&A: “The brilliance of the Windows 8 strategy is we get all of the applications that come from Windows on x86, as well as applications that have gone through the process of rethinking how they might work in a Windows 8 world… We are rethinking and working hard on what it would mean to do Office Metro style.”

It’s no surprise that Office will be coming to ARM, given the importance of the Office suite in Microsoft’s product portfolio (and knowing the vast revenues that sales of Office bring in for the company), but it’s certainly good to know that a Metro version will be on the way. This is a far cry from Microsoft’s Tablet PC push a decade ago, when the Office division famously refused to develop versions of its programs optimised for tablet usage.

Thankfully, Microsoft’s numerous internal divisions tend to play more nicely these days, and the better integration and exposure of the company’s various products – first with Windows Phone, and soon with Windows 8 – will surely strengthen its efforts.