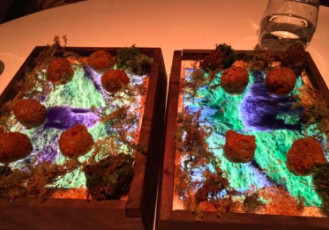 It has been over six years since the first iPad was introduced to the world and, as time has progressed, the tablet has gone from niche product to a formidable tool that can handle the rigors of both work and play.

While Apple has come a long way from offering just one tablet, the sheer volume of options over the years has enabled the company to put its product into the hands of millions. Even so, it appears now that only for a select few, it has also become the backdrop for their next meal.

This isn't a story about how your young niece or nephew or perhaps your child has laid down animal crackers or other edibles on their iPad so they can casually snack while enjoying a bit of Netflix. Instead, this is the culinary adventure conjured by a Michelin-starred restaurant located in San Francisco, Quince.

Although the motivation behind the dish is unknown, the restaurant is now offering the menu item known as "a dog in search of gold" that is plated on an iPad. The image offers a caption that reads: "white truffle croquettes on iPads playing videos of water dogs on the truffle-hunt". While it is unclear how the iPads are contained, one has to assume that they are under a clear platform, since iPads cannot be washed like traditional dinnerware. Still, it does present an interesting opportunity to experience something different and will without a doubt become one of those unique memorable moments.