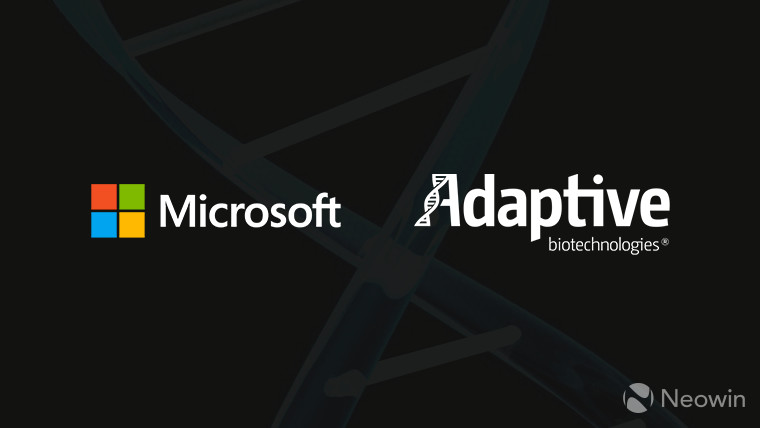 Microsoft and Seattle-based Adaptive Biotechnologies have announced a new partnership which aims to use artificial intelligence in order to decode the immune system and thus better understand, prevent, and treat disease.

In essence, the body's immune response is controlled mostly by two types of cells: B-cells (which originate in the bone marrow) and T-cells (which mature in and derive their name from an organ called the thymus). On the surface, each of these has a large number of proteins that act as receptors and are dubbed either BCRs (B-cell receptors) or TCRs (T-cell receptors). This is important to note due to the fact that BCRs are more thoroughly understood than TCRs, with the sequencing of the latter still in its early stages.

T-cells and by extension TCRs play quite a big role in the proper function of your acquired immune response, in particular working with a series of proteins which form the major histocompatibility complex (MHC). As the name implies, the MHC also plays an important role in organ transplants.

Because TCRs are more difficult to map to certain antigens (the molecules in your body capable of immune response), Microsoft has made an investment of an as of yet undisclosed amount into Adaptive Biotechnologies. The Redmond giant plans to use AB's sequencing capabilities and its very own machine learning and AI resources to create what Peter Lee, Corporate VP of AI + Research at Microsoft, calls the "universal blood test".

While a disease may be identical, the extent to which a person is affected - and indeed what signs they show - is dictated by their particular genetic and immune makeup. As such, this test would allow a much better understanding of the reasoning behind the way in which a disease manifests, as well as open the door to preventative and predictive medicine. In Lee's own words:

The basis of this approach is to develop a universal T-cell receptor/antigen map – a model of T-cell receptor sequences and the codes of the antigens they have fought. This universal map of the immune system will enable earlier and more accurate diagnosis of disease and eventually lead to a better understanding of overall human health. Microsoft and Adaptive expect this universal map to be the key for the research and development of simple blood-based diagnostics that are broadly accessible to people around the world.

This latest partnership is part of Microsoft's Healthcare NExT initiative, which was unveiled last year. Its aim is to find ways of using AI and cloud computing to enhance healthcare capabilities.

Although Peter Lee along with Chad Robins will have more details to share about this in a talk dubbed "Decoding the Human Immune System: A Closer Look at a Landmark Partnership" at the JP Morgan Healthcare Conference in San Francisco on January 10, it's unclear whether a recording of it will be provided.

What do you think of this initiative? Sound off in the comments below!