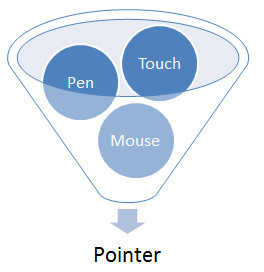 Back in September, Microsoft announced its proposal for a new website standard proposal called Pointer Events that will allow websites to accept inputs from a number of different sources, including touch, pen and the good ol' fashioned mouse-keyboard combo. In December, Microsoft release a prototype patch for its Pointer Events specifications that could be used in WebKit-based web browsers, such as Google Chrome.

Google then turned around in April and announced it would ditch WebKit in future versions of Chrome in favor of a new engine, Blink. This meant that Microsoft's efforts to push their Pointer Events specifications would not be used by Chrome. But now Microsoft has announced that it is adding support for Pointer Events to the Blink engine.

In a post on the Microsoft Open Technologies website, Microsoft said that even though it is releasing a way for Pointer Events to work in Blink, it still plans to "continue our collaboration with the WebKit community." It also said that the Pointer Events specification has now been published by the World Wide Web Consortium as a Candidate Recommendation. Microsoft said the decision by the W3C is "an important step" on the path to getting Pointer Events as a website standard. It added:

So much progress — Pointer Events enables you to build for the future of the Web, today. So when someone invents the next big input breakthrough (such as Tom Cruise’s crime lab from Minority Report or Tony Stark’s holographic CAD console from Iron Man), you’re already on your way to supporting new input features.