Today Microsoft has taken the wraps off the pricing for Office 2013, with new subscription packages under the Office 365 brand being the main feature. These subscription packages start at $99.99 per year (or $8.33 per month) with Office 365 Home Premium, which gives you access to all Office 2013 applications such as Word, Excel, PowerPoint, OneNote, Outlook, Publisher and Access. 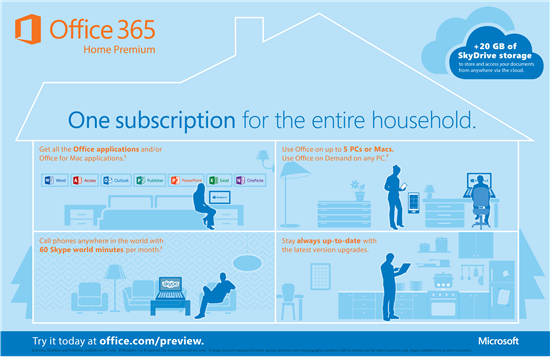 As well as access to the traditional Office suite, you also get to use Office on up to five computers (PC or Mac), you get access to on-demand streaming versions of Office, an extra 20 GB of SkyDrive storage and 60 minutes of Skype world calling.

For businesses there's Office 365 Small Business Premium, which includes Lync and InfoPath alongside the traditional apps, plus HD video conferencing, shared calendars, a 25 GB mailbox and 10 GB of SharePoint storage - all for $149.99 per user per year, with each subscription being valid on up to five PCs.

Here's a breakdown of those prices:

Of course if you're not the sort of person who likes to purchase a subscription to software, there will be standalone versions available, although you lose a number of features you get in the subscription packages such as extra SkyDrive space and streaming apps. Here's a breakdown of the standalone packages.

These standalone licenses are only valid on one PC, and are a price increase of 10-17% from current Office 2010 prices. Microsoft has stated that the subscription models will be updated with new capabilities "multiple times per year", which the standalone packages apparently will not receive.

Microsoft also confirmed the Office 2013 upgrade program we saw last week. If you purchase a copy of Office 2010 between October 19th, 2012 and April 30th, 2013 you will be eligible to receive a complementary upgrade to the equivalent version of Office 2013, or an Office 365 one year subscription, when it's available.

Finally, Microsoft hasn't announced when Office 2013 will be available to the public, although they have mentioned it will be available in 277 markets in over 70 currencies. Rather than going the traditional boxed copy route, Microsoft will be offering a Product Key Card where you will need to download Office to use.