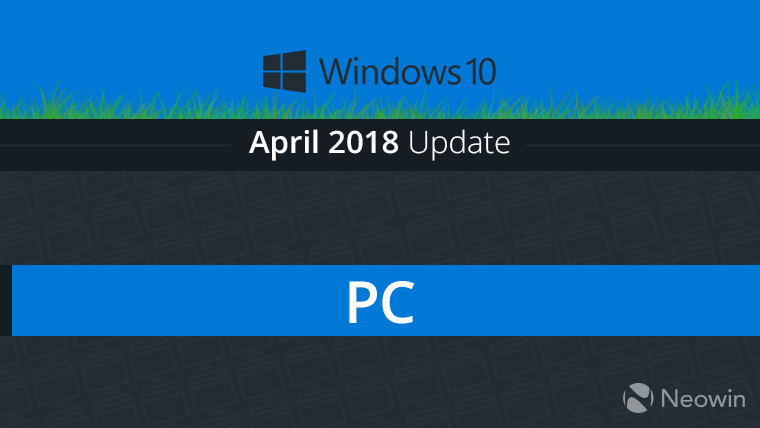 Codenamed Redstone 4, Microsoft has been testing the next feature update to Windows 10 since August 31, 2017. In that time, there have been 24 Insider Preview builds released to the Fast ring, but Microsoft never actually announced any details about the update, such as what it will be called or when it's coming.

Today, the company finally announced the Windows 10 April 2018 Update. It's pretty clear that the naming was a close to last-minute change, since there were previously various references in the OS to it being called the Spring Creators Update.

As you'd expect, the April 2018 Update contains a number of new features for the OS, the most notable of which is Timeline. Timeline allows you to go back in time to find documents and files that you were previously working on, and even find older versions of them.

There are also a number of improvements to Microsoft's in-house Edge browser; most notably, that it now supports Progressive Web Apps (PWAs). There are already some available right now if you're on the new feature update, such as the latest version of the Twitter app.

One feature that might fly under the radar a bit is called Near Share, which works similar to Apple's AirDrop. It allows you to easily share content between Windows 10 PCs. Obviously, Windows phones aren't supported in this, since there's no April 2018 Update for mobile devices. Microsoft has been working on getting things like this working on iOS and Android, with its mobile Edge browser and apps like Photos Companion.

Most of what you'll notice though are new Fluent Design enhancements across the board. While many Fluent Design elements were added in the Fall Creators Update, it's been taken to a new level with the Windows 10 April 2018 Update. You'll find more Acrylic and Reveal elements in the Start Menu, the redesigned Settings app, Edge, the taskbar, and more.

The Windows 10 April 2018 Update will be available on Monday, April 30 for those that use Microsoft's Update Assistant tool or the Media Creation Tool, and - as previously reported by Neowin - it will begin rolling out through Windows Update on May 8.