If you tend to ignore newsletter emails from Microsoft or any other company for that matter, you might want to reconsider your stance following the emergence of rather interesting news. First pointed out by a Reddit user, it has been discovered that the Redmond giant has been sending out hidden $10 gift cards through its promotional emails commemorating the holiday season. 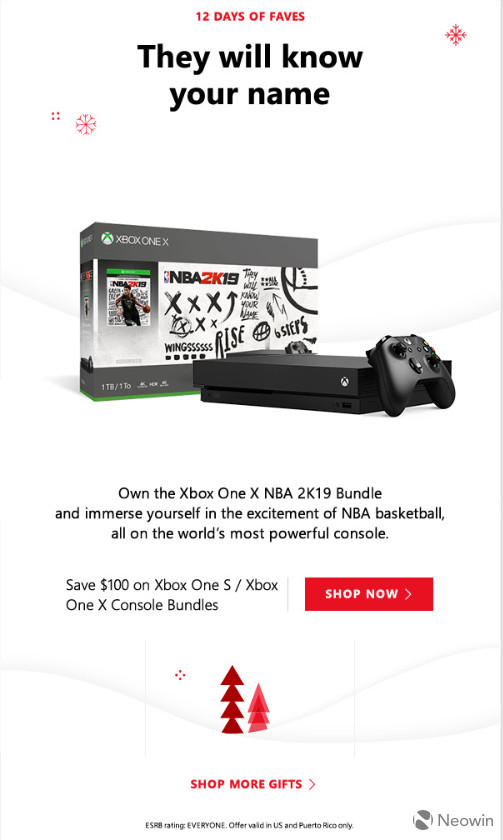 Apparently, users who clicked on the trees shown in a screenshot of the email were redirected to a separate website that would then provide them with a free $10 gift card. However, don't start sifting through your spam folder just yet. As has been confirmed by a number of people in the comments section of the original post, the offer has seemingly expired a few hours ago. Clicking on the concealed link now will only lead you to a webpage that states that the "limited offer is no longer available". Images posted by multiple users have also confirmed that the free gift cards were only available to people in the U.S. or Puerto Rico.

That's not all, however. Rather interestingly, this email is only one of three that have been received by users in the past few weeks. As is indicated by the fine print displayed underneath the offer expiration message, it looks as though similar emails were sent out on November 27 and December 5, aside from the most recent one emailed a couple of days ago. The first of the aforementioned emails was sent commemorating Black Friday, and it contained the picture of a blue squirrel, clicking upon which would grant you $10 in the form of a gift card. Therefore, it seems that a certain pattern is being followed here.

It goes without saying that the offers in the previous two emails have expired as well. Regardless, the message "More surprises are on the way..." clearly indicates that Microsoft has more, perhaps similar, surprises planned for the holiday season. Don't forget to subscribe to promotional offers from Microsoft in case you are interested in receiving such emails in the future.