It's been a while since Microsoft announced vertical tabs for its Edge browser, and the feature has been available in the Canary channel since August. All you have to do to use it is enable a flag. Now, it's seemingly coming to the Dev channel today. 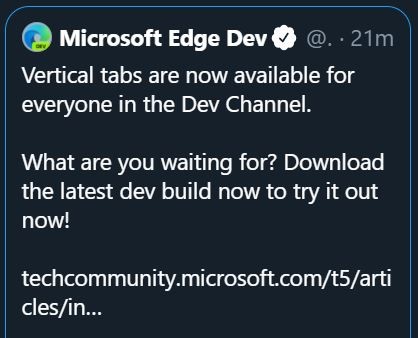 We're also due for a new Edge Dev build. Microsoft releases new builds to the Dev channel weekly, and typically on Tuesdays, so the timing here lines up. It also seems likely given that this feature has been available in the Canary channel for so long.

The team will announce the new Edge Dev build when it's available, and it should contain more detailed instructions on how to use the vertical tabs feature. Unlike the Canary builds, you probably won't need to activate a flag to use the feature in the Dev channel. When it is active though, there will be a toggle in the top-left to turn the feature on or off.

Update: It's official, and the feature is now live. You don't need to enable a flag; just click the icon in the top-left of the browser. You also don't need to install a new Edge Dev build. This seems to be a server-side change.